Aberdeen venue alive and kicking after root and branch refurb

WHEN Aberdeen’s College bar opened back in 1994 it was considered quite a trailblazer.

It was a winning formula and, since then, the 300-capacity venue, which is part of family-owned multiple operator PB Devco’s portfolio, has become something of an institution in the granite city.

Of course it has evolved down the years. And, a few months ago, the group took the decision to carry out a root and branch refurbishment of the sports bar.

“It’s one of the originals; it’s the longest-standing in our portfolio,” Clarkson told SLTN.

“We’d been thinking about it for a while and decided it was time to do something and breathe new life into the place.

“We had another project on Union Street and all the drawings done for that but we wanted to get this done before the World Cup started so we gave ourselves a seven-week window, which actually ended up being eight, and decided to just go for it.”

Although the project didn’t include any structural changes beyond replacing the brick entrance with glass, it was a “complete overhaul”, which involved stripping the unit back completely.

The new-look space is dominated by the bar, which is clad in black 3D tiles with a black granite top; while the bar is dominated by a TV ‘cube’ suspended above it, which was inspired by the screens more commonly found at ice hockey matches.

There’s also two large HD projector screens at either end of the venue; screens, along with service buttons, in each of the new booths and at tables on the mezzanine level; and three large screens in the area beneath the mezzanine at the back of the venue, which has also been kitted out with a stage for live music.

Clarkson said audio visual was naturally a top priority when it came to refurbishing the sports bar. 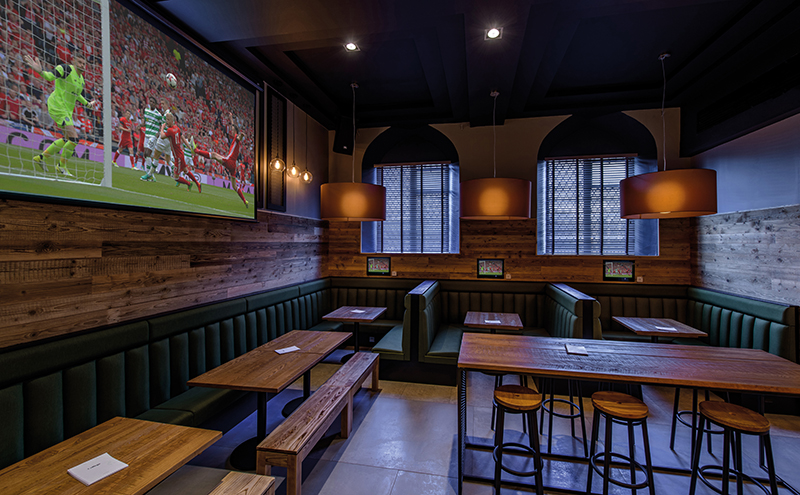 “Any bar can open and chuck up screens and say they’re a sports bar; we wanted to give it a real focal point and a point of difference,” he said.

“We built a bespoke viewing cube above the bar with screens on each of the four sides, a bit like the big screens at ice hockey.

“It looks great; it’s something different. We’re always keen to do things outside the box.”

When it comes to the interior, it too could be considered ‘different’ to that of a traditional sports bar.

The aim, said Clarkson, was to “soften the look” to appeal to a broader clientele; and the result is an interior which blends a number of sports bar hallmarks with contemporary design features.

The striking down-lit bar is finished with green glass light pendants, high chairs upholstered in a bold green fabric, and a mesh-backed gantry – giving a glimpse through to the rear of the venue – with a copper tank for the Tennent’s tank lager system (see story left) in the centre spot.

The area is furnished with a mix of high wood tables with stools, lower tables with benches, and booths and banquette seating upholstered in green; wood cladding on the walls and oversized light fittings above the booths complete the look.

Behind the bar, a small seating area is kitted out with a drinks ledge in the same black granite as the bar top and the same high chairs found in the bar.

This leads on to the separate area at the back which is home to the stage; while a double staircase set against a feature brick wall leads to the mezzanine seating area.

And it wasn’t just the inside of the venue that benefitted from the £300,000 refurbishment; the beer garden, which can accommodate around 50 people, was also spruced up as part of the project.

“The Tennent’s tanks are a prominent feature of the design; it was the right time for us to do something like that and it’s the right fit for this,” said Clarkson.

“Structurally it’s the same site, the only thing we did was knock through a brick entrance and replace it with glass to let in more light, but it’s a completely different look; it’s chalk and cheese.

“We’ve softened the place to make it more appealing to a broader range of customers.

“College is a place that’s close to our hearts; it looks great.”