EDINBURGH cocktail bar Kin was the setting for a hard-fought contest last month when Courvoisier held the Scottish heat of its Toast of Paris competition.

Celebrating Courvoisier’s historic ties to the French capital (the Cognac house was established by Emmanuel Courvoisier and business partner Louis Gallois in Paris in 1809 before later relocating to Jarnac) The Toast of Paris each year challenges bartenders to get creative with Cognac for a chance to win a trip to Chateau Courvoisier in Jarnac and meet master blender Patrice Pinet.

Edinburgh has already made its mark on the competition, with last year’s global champion, Jonathan Arthur, hailing from Edinburgh bar Bramble.

This year entrants were invited to create either a Cognac-centred twist on a classic cocktail, a ‘Café Courvoisier’ serve – or both.

Competitors in the regional heats were fighting for the chance to take part in the UK final in London and, ultimately, the competition’s global final in Paris. 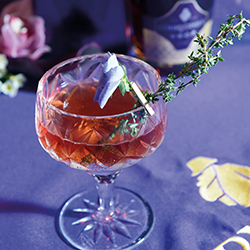 Bartenders from across Scotland threw their hats (or berets) in the ring with some inventive and original cocktails, presenting their drinks to a panel led by Courvoisier global brand ambassador, Rebecca Asseline.

Michael’s cocktail, the Montmarte & Charente, was an adaptation of the classic gin cocktail, Twentieth Century, that drew on the bartender’s own experiences in Paris.

“I wanted to do a drink that was inspired to a certain degree by my impressions of Paris as a teenager, and that had a lot to do with art, with the impressionist movement, with being a bit of a painter myself at that time,” he said.

“And I wanted to marry that together with where I was at now as a bartender.”

Meanwhile, Nathaniel’s entry – When Harry Met Josephine – was inspired by Nathaniel’s home city of Dundee and arguably its most famous bartender: Harry MacElhone.

People came from all over the country to support their fellow bartenders. It was heart-warming.

The creator of cocktails including the Bloody Mary, the Sidecar and the Boulevardier, MacElhone emigrated from Dundee to Paris in the early 1920s, where he ran Harry’s New York Bar.

“It filled me with pride, that somebody from Dundee did these things, made these cocktails and made a name for himself at a time when it was really difficult to do that,” said Nathaniel.

“I tried making a Martini with Cognac. It’s pretty good. But the Boulevardier in particular, because it was invented by Harry, hit home with me.”

It was a special day for the two winners, but they weren’t the only bartenders that were pleased with the competition.

Kin owners Jody Buchan and Sam Baxendale, who launched the bar late last year, were happy to have worked with Courvoisier to showcase some of Scotland’s best bartenders. 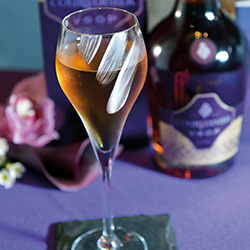 Jody said: “It was Sam and I’s dream, and the dream of a lot of bartenders, to own our own venue.

“For us to be able to give back and host something as phenomenal as this for young bartenders in Scotland gives you a warm fuzzy feeling.

“We’re a little bit over the four month mark now, and it’s very flattering to be a venue that brands want to work with.”

And he was full of praise for everyone that attended the event – whether they were competing or not.

“It was really quite heart-warming to see.”