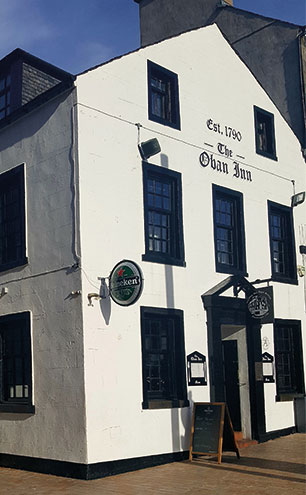 WHEN Maire Lynch and Steven Shaw opened The Oban Inn on November 4, 2016 it was to cheers from a crowd of locals.

The relaunch marked the end of a nine-year closure for the historic pub, which has been a fixture on Oban’s seafront since 1790.

It also held extra significance for Maire, who had first owned the pub in 1979.

“It was great,” she told SLTN. “Everyone was clapping and cheering.

“I never imagined I’d be back here after I sold it.”

In fact Maire’s homecoming was to take the best part of three decades and see her operate a number of other venues in the west coast town.

Originally from Dublin, Maire came to Scotland in 1969 to the Edinburgh Festival after her singing talent was spotted in the Irish capital, and got her first taste of the trade in 1971 with a job in the then Caledonian Hotel in Oban (now the Perle Oban).

“That’s when I got the bug and thought ‘I want my own place’,” Maire recalled.

She went on to do just that, owning a guest house near McCaig’s Tower, which overlooks the town, before buying The Oban Inn in 1979.

I never imagined I’d be back here but I’m delighted; it’s a special place.

At that time, the inn comprised a dining area on the ground floor with three letting rooms on the first floor, which had been used as a stopover by islanders travelling to the cities.

But the market was shifting and Maire saw potential in taking the inn back to its roots; so she set about creating her take on how it may have looked in the early 19th century, not long after it first opened.

A flagstone floor and dark wood beams were paired with a dark wood carved bar and several nods to the inn’s seafront location, including a ship’s wheel, sailing charts of Oban and Kerrera, ships’ lantern-style lights and a mirror set in a porthole.

Upstairs, Maire converted the three bedrooms into a 60-cover lounge bar. She added wood panelling to the walls and ceiling, in keeping with the period feel she had created in the bar downstairs, and sourced a marble fireplace and a number of small stained glass windows from an antiques dealer in Dublin.

“The stained glass was in a chicken shed and it was damaged but I could see it could be fixed so I brought it back in a van, dug out holes in the walls and put in the stained glass with lights behind; I love it,” she said.

“Downstairs the bar is meant to look like it would have originally; it’s mock original.

“I got a lot of ideas from Dickens’ time with the beams and the stone floor. I just thought about that time and that inspired it I suppose.

Spurred on by the success, Maire sold The Oban Inn in 1986 (Steven subsequently worked there for a couple of years) and went on to buy and sell businesses including The Lorne (where she met Steven) and the Woodside Hotel; they went on to acquire the 24-bedroom Rowantree Hotel  and steakhouse almost a decade ago and the Tartan Tavern, which they have owned for the past five years.

But The Oban Inn was never far from their thoughts.

“We would walk past it every day and it was just sitting there empty.

“We knew we wanted to take it on.” 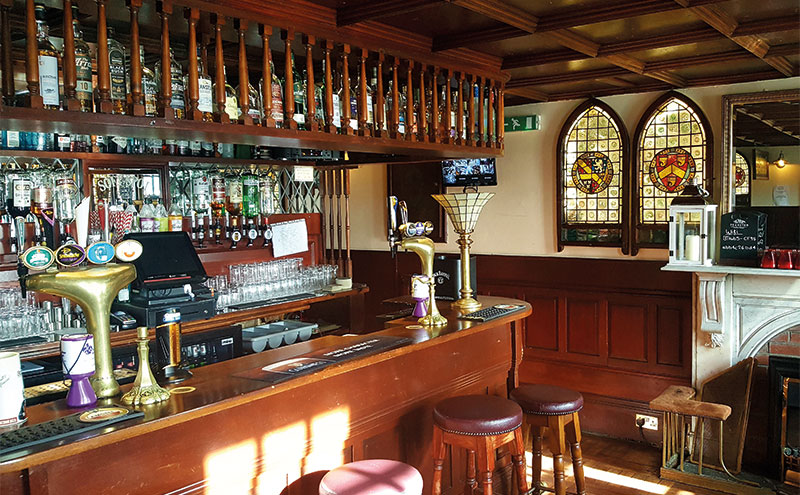 Acquiring the lease in October 2016, Maire and Steven stepped back into the pub which had been shut for nine years – and which Maire had sold 30 years earlier – to find much of the interior she had painstakingly created the first time around intact – albeit in need of a clean and a fresh coat of paint.

The pair got stuck in to the work and, a month later, opened the doors of The Oban Inn once again.

Much of the original concept has been reinstated too – quality pub food and beer (Fyne Ales’ Jarl, Highlander and Vital Spark were on when SLTN visited alongside Heineken brands including Foster’s, Amstel and John Smith’s), and a range of wines and spirits sourced from Inverarity Morton, including 49 malt whiskies (Highland Park was Malt of the Month); there’s also regular live music.

“There’s no TVs and no machines; people talk, which is what I think a pub should be about,” said Maire.

“We get a really nice mix of people – tourists and locals; and people have been coming in with stories about it since we reopened.

“I’m delighted to have it back. It’s a special place.”