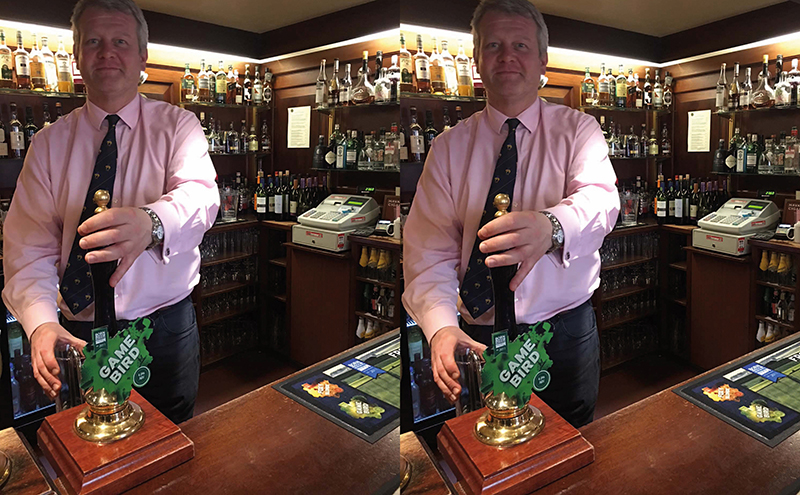 A FOCUS on food and cask ale has paid off for a hotel in the Borders, after it scooped an award from CAMRA.

Burts Hotel in Melrose was bought by Graham and Anne Henderson in 1971 and is now run by their son, Nick (above), and wife Trish. The business – which includes a 60-cover bar and bistro, a 45-cover restaurant and 20 letting bedrooms – was recently presented with the Real Ale Quality Award by the Edinburgh, Midlothian and South East Scotland branch of CAMRA, after the quality of its pints was scored highest by branch members in 2017.

Real ale has been part of the offer at Burts for more than two decades, and the hotel’s bar and bistro sports three regularly-rotating handpulls.

While one of the three taps is usually given over to an English ale such as Timothy Taylor’s Landlord, the other two are dedicated to cask ales from Scottish breweries.

Recent brewers to feature in the hotel have included Broughton Ales, Fyne Ales, Kelburn Brewery, Tempest and Born in the Borders.

Nick said cask ale is synonymous with Burts and the quality of the beer is a point of pride with him.

And as Burts is a food-led business – between 80% and 90% of the venue’s wet sales are with food – it’s important each beer can be paired with the hotel’s menu.

“I think in Burts cask ale goes hand in hand with the food offer,” said Nick.

“They go well with the style of food we’re serving – that wholesome, homemade pubby food.

“All these golden beers and blonde ales tend to match quite well, as opposed to big heavy porters, which might overwhelm the food.”

He added that slightly hoppier beers, between 3.5% and 4.5% in ABV, are currently most popular with diners.