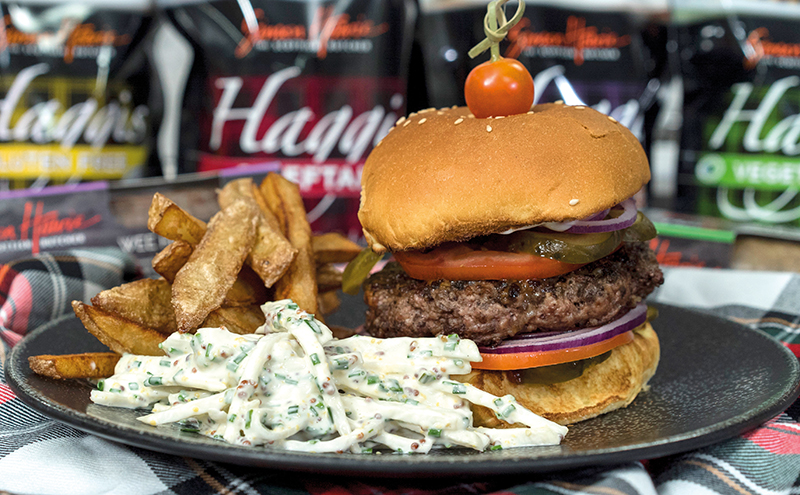 Stage one: making the burgers

Method:
1. To make the burger mix, simply mix the haggis and the minced beef together and add a little salt. The great thing with adding Simon Howie haggis to the mix is the seasoning is done by the haggis and gives the burger an amazing flavour while also helping to hold in the moisture.

2. In my opinion I think burgers should be pressed. Use a pressing machine or, if you don’t have one, a plastic lid that’s about 12cm wide x 3cm deep. Cover the lid with a large piece of cling film, then press the mixture into the cling film-covered lid; fold over the cling film, upturn the lid and bang down onto the work surface to release the ‘pressed’ burger.

3. Heat up a griddle pan or frying pan, add a little oil and then place the burger into the pan. The secret is to not touch the burger or turn it over until it has a chance to brown.

4. While the burger is cooking through on both sides, toast the bun under the grill.

5. You can now start to construct it. I like to build a burger up in as many layers as possible – relish, burger, tomato, onion, pickle, lettuce, mayo, etc. This will make every mouthful different.

Method:
1. Peel then shred a medium-sized (450g) celeriac. The shreds should not be too fine, nor should they be much thicker than a matchstick.

2. Toss them immediately in the juice of half a lemon.

4. Season with salt and black pepper, then fold into the shredded celeriac.

Oil to fry the chips

2. Blanch the chips – either steam, boil or cook in oil at a low temperature of 130°C until soft.