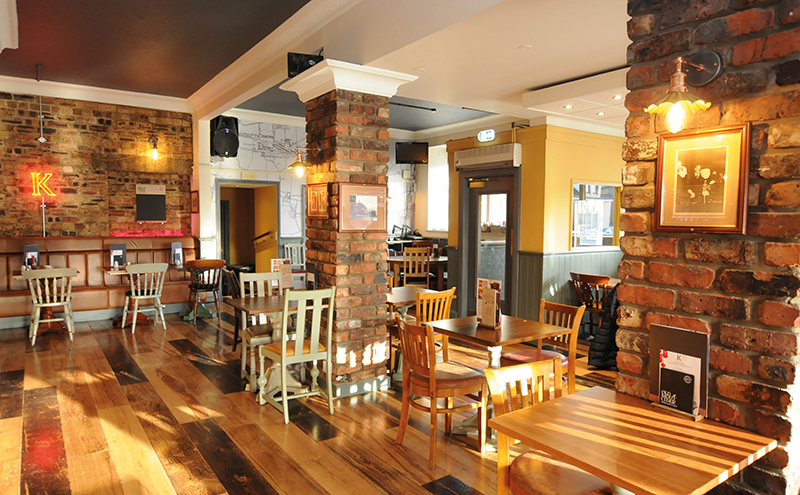 WITH almost 250 years of trading history, one might expect The Kirkhouse in Glasgow’s east end to be a throwback to the on-trade of the past.

But the bar, established in 1771, is quite the opposite – and meeting contemporary consumer ‘wants’ has seen it prosper, becoming what licensee Frank Healy calls the “hub of the Shettleston community”, where he has lived for almost 40 years.

Frank, who keeps a steady eye on shifts in consumer behaviour, is determined to stay ahead of the local competition and, to this end, the pub recently underwent the fourth major refurbishment in the Healy family’s 18 years as operators.

The works have taken The Kirkhouse from what was a more traditional pub with a circular bar and tiled flooring to a sleek, modern bar, which wouldn’t be out of place in the city centre.

To achieve this look a raft of changes has been made to the venue.

The space has been lightened with new tables and chairs in lighter wood tones and leathers replacing the previous mahoganies and dark upholstery, while more contemporary lighting and fixtures have been employed throughout the venue to further modernise the overall look.

“You’ve got to move with the times, although some people don’t want to,” said Frank. “The area had been crying out for something like this.” 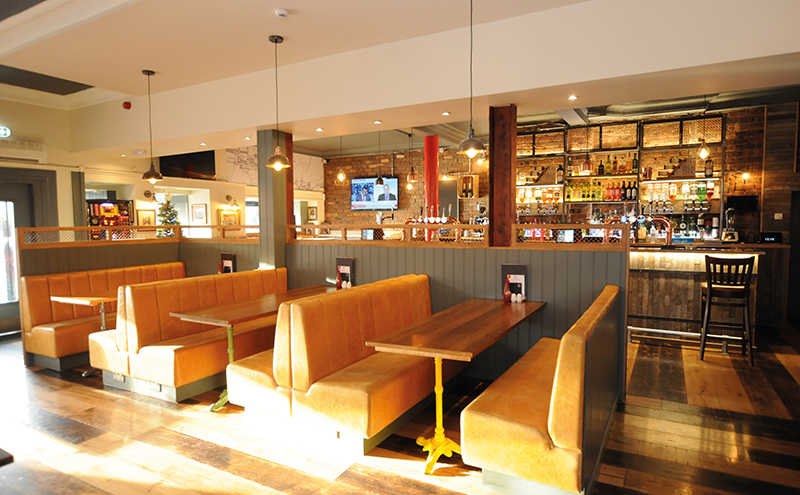 “What I have done is bring a city centre bar to the east end of Glasgow. It’s putting something people would usually travel into the city for on their doorsteps.”

Frank’s pub career began when his father used funds from an early retirement package to acquire the leasehold to a bar in Glasgow’s Maryhill from the then Scottish & Newcastle (now Star Pubs & Bars) in 1998.

After turning that pub’s fortunes around, the Healys moved the seven miles across the city to Shettleston, where the family had its roots, taking on The Kirkhouse in 2000 – their second leasehold with Scottish & Newcastle.

You’ve got to move with the times, although some people don’t want to.

At that time, the brewer and pub company was working to make food a central part of its leased pubs; and Frank said that while there was trepidation from some lessees, he and his father – keen to provide their new business with a USP – had the opposite view.

“Taking over the Kirkhouse was on the grounds that we would introduce food,” he said. “The business became very, very popular, as there was no one else doing that in Shettleston at the time.

“We were actually struggling to cope with demand, so in 2002 we went to our business development manager at Scottish & Newcastle and said we needed to change the layout.”

Making the outlet more open plan and adding covers was key to that initial renovation.The latest round of investment – a £120,000 joint spend by Star Pubs & Bars and the Healys – aimed to build on that. The three-week refurbishment, which saw Frank work with Donaldson Construction, involved moving dividing walls to allow for a subtle partition of the bar and restaurant areas, creating distinct spaces and improving the operational flow.

The changes added a further 25 covers, taking the total number to 90, and increasing the venue’s overall capacity by a third. Fixed seating, including booths fitted with phone chargers, was installed. Frank said the new layout caters to an increasing number of female customers and families coming in for food.

What I have done is bring a city centre bar to the east end of Glasgow.

For this reason televised sport – which remains a feature of the bar area – has been taken out of the dining area.

Adapting to change has been central to Frank’s business philosophy and he credits the early repositioning of the bar against the majority of wet-led pubs in the area with helping the venue to thrive over the last decade.

Before the smoking ban was introduced in March 2006, Frank did some fact-finding in Ireland to see how the ban there had affected the licensed trade. He said: “The pubs were empty; there had been mass redundancies, so we decided to plan for it.

“We put up shelters at the side of the building with wall heaters. Other places weren’t ready for it but we had done our homework.”

And when the lower drink drive limit came into force in December 2014, it impacted on The Kirkhouse’s after work trade.

But with an improved food offer available until 9pm, Frank said the same customers are now going home before returning in groups for dinner and drinks – which has increased their overall spend.

While the idea of regular evolution is ingrained into the fabric of the pub’s success, so too is family. Just as customers change, so has the team behind the bar. With his father having retired a year ago, Frank brought in more of his family to help with the business.

Wife Sylvia now looks after the catering, and sons Frank junior (also a director) and Antoni (general manager) are also on the management team. And Frank has more plans for the family business going forward.

He said: “We’ve all played a part to get where we are and I think we’ll just continue to grow and grow.

“We’ve already had planning permission granted for a new private function suite and expansion of the kitchen, so that’s a possibility. “For now, the most important thing is to keep improving consistently.

“That’s what I strive for.”