WHISKY distilling has returned to the banks of the River Clyde with the official opening of the new Clydeside Distillery.

Located in the Pump House building between the Riverside Museum and the SSE Hydro, the distillery is headed by Tim Morrison, formerly of Morrison Bowmore Distillers and the current proprietor of the AD Rattray Scotch Whisky Company, and his son Andrew, who is the distillery’s commercial director.

The Pump House once controlled entry to the Queen’s Dock, one of the city’s most famous shipping ports, which was built by Tim’s great grandfather in 1877.

The site is now home to the new distillery, which also has a visitor centre, shop and café.

Andrew said the project has been a “labour of love”.

“We want to welcome everyone, from Glasgow natives and Scottish whisky lovers to international whisky enthusiasts, tourists and those who are visiting the city,” he said.

“Glasgow has a long and special relationship with Scotch whisky and our visitor experience will bring this to life.” 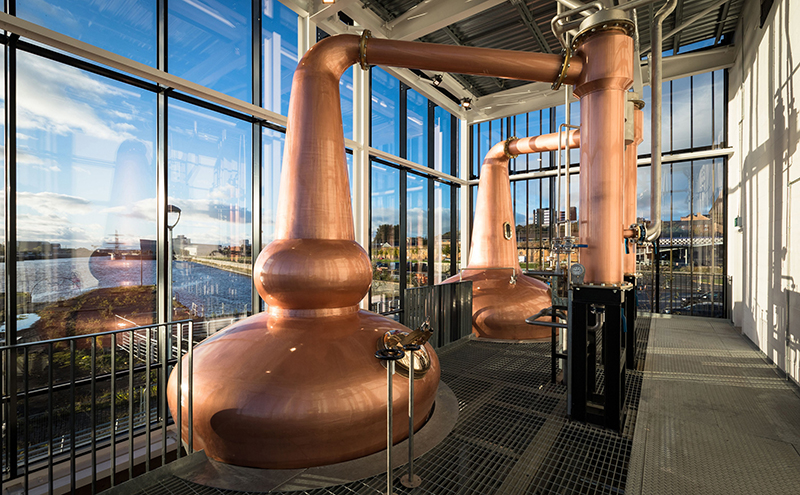 Created in the Pump House building on a site formerly known as the Queen’s Dock, The Clydeside Distillery was spearheaded by Tim Morrison, owner of whisky bottler AD Rattray and formerly of Morrison Bowmore Distillers, and his son Andrew, who is commercial director of the distillery. Tim is the great grandson of John Morrison, who built the Queen’s Dock, to which the Pump House controlled entry so Customs and Excise could keep an eye on goods – including Scotch whisky – passing in and out, in 1877.

Q: Where is the distillery?

A: The Clydeside Distillery sits on the banks of the Clyde, on a site formerly known as the Queen’s Dock – a vast commercial wet dock opened by Queen Victoria in 1877 which rapidly became the beating heart of the city’s shipping industry; the Pump House controlled the entry gate to the Queen’s Dock. With the decline of Glasgow shipping traffic almost a century later, the dock eventually became redundant and was filled in using rubble from the demolition of the St Enoch station. The Scottish Events Campus now occupies the site with the SSE Hydro, SEC Armadillo, Crowne Plaza Hotel and Riverside Museum all within a stone’s throw of The Clydeside Distillery.

Q: How did it all begin?

A: During my time at AD Rattray it became clear that one of the biggest challenges we were likely to face in the future was supply and sourcing quality whisky. We knew we had to future-proof our business by taking control of our own supply so we decided to build our own distillery and take control of our own destiny. This has been a lengthy process and following major negotiations with other sites we decided that with the level of investment we were putting in, we wanted our own land to build a distillery which we could design, develop and nurture from the very start.

Q: What were the project’s main challenges?

A: The fact that the Pump House is a listed building meant we were faced with significant complications from the beginning. The skills and expertise of our team were tested when dealing with the building’s stonework which needed significant attention. The Clydeside Distillery is a mix of old and new and while we have been passionately preserving its history we have created a contemporary new visitor experience which brings this part of the city to life. Installing the necessary distillery equipment also presented us with various challenges, but these were primarily down to the good old Scottish weather which never failed to test our team. In March we took delivery of our stunning copper stills from Forsyths, which is based in Moray, but high winds and rain prevented us from lowering them into place for several weeks which caused knock-on delays and obvious frustration. It certainly was a nail-biting moment watching them move in the wind as they were craned into place.

Q: What inspired the look and feel of the distillery?

A: The amazing riverside location of the Pump House combined with the history of the Queen’s Dock has been hugely influential. This area was the heart of Glasgow’s shipping industry so we wanted to create something as authentic as possible; our interactive whisky experience transports visitors back to Glasgow in an era when the Queen’s Dock was in full operation. What we’ve created is a stylish, contemporary building which preserves the old and produces the new. We have been clear from the very beginning of the project that The Clydeside Distillery is for everyone. We have an amazing story to tell and believe there is something for everyone to enjoy.

A: We’re different from other distilleries mainly because of our location – not many whisky distilleries are based in city centres and we see this as a real unique selling point. Our process is typical double distillation and we are using a dry yeast, which not many distilleries use.

Q: What was the most rewarding part of the project?

A: To see the spirit start to flow through the stills. This really was the culmination of five years of hard work for all involved and a moment I am very proud to have been part of.

Q: What are the biggest trends in whisky at the moment?

A: Whisky is definitely becoming much more popular with younger audiences and I have certainly seen the perception that whisky comes from the mysterious Highlands of Scotland shift to that of a much more educated whisky drinker. Whether a Lowland, Highland, Speyside or Islay, there is a whisky out there for everyone. Appreciation for Scotch whisky has been there for centuries but we are seeing a whole new generation discover the distinctive style and quality of our whisky – not just here in Scotland but all over the world.