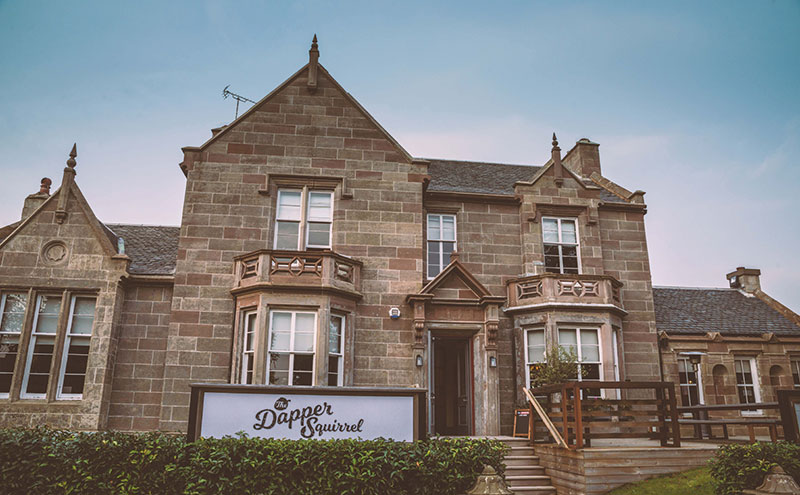 THE old adage ‘location, location, location’ certainly rings true in the on-trade; what may work well in one area is not guaranteed success in another. So when Neil Connolly, who has operated Glasgow late night bar Moskito for the past 17 years, found himself setting up in the Ayrshire town of Kilmarnock, he knew he would have to approach it a bit differently.

Despite having decided it was time to move on from his city business, Neil admitted that he could not have predicted a move to Kilmarnock.

Yet in what proved to be a fortuitous bit of timing, that’s exactly where he found himself when, along with development chef/restaurateur Michael Kilkie, he took the helm of newly refurbished – and named – The Dapper Squirrel.

Michael had previously worked at Glasgow-based G1 Group and when the company, which had acquired the Kilmarnock unit in 2015 and operated it as Franklin & Sloane, was looking for a new tenant, the duo seized the opportunity.

“So he brought me through and I absolutely fell in love with the building. I thought it was absolutely astonishing – it’s beautiful; the space [had] massive potential.”

We quite liked the silliness of it and I tell you what – you don’t forget the name.

Leasing the building free of tie, the pair wasted no time making their mark; when they got the keys, (September 4) the bar was stripped out the next day.

Neil admitted that the small bar had been the only “dealbreaker” of the venue.

Working with Glasgow-based building contractor, Complete Solutions Contracts, among others, chief amongst the changes was the installation of a new bar, which is three times the length of its predecessor.

Scott Adams, managing director of the firm, described the renovation as “a pretty fluid process”, which he reckons was partly down to Neil, as “he afforded us a good level of trust to return the vision they had in their heads”.

Elsewhere, the ethos of ‘less is more’ is evident throughout. Working with interior design firm QM Design, many changes were made to pare back the previous design, as well as accentuate the building’s features – with certain walls taken back to the original sandstone and natural finishes and colours utilised throughout.

“You can see all of the ceiling [now], how high it is, the cornicing, the original features,” said Neil, adding that the aim was to make the interior “warm, relaxed and comfortable”.

Neil always knew that a collaborative relationship was a necessity.

“The relationship I’ve got with [QM Design] is we bounce ideas off each other; I’d never have a designer come in and say this is what you want to do,” he said.

Other changes have been made to better utilise the venue’s space.

Beyond the 90 covers downstairs, Neil and Michael have put the upstairs space to good use. Previously a private dining room, with capacity for an additional 40 covers and equipped with its own bar, the space is now used for all manner of events, from movie screenings to birthday bashes, as well as broadcasting the big fixtures via Sky Sports and BT Sport.

Important changes were made to the outdoor area, too.

Working with Caledonia Play, a Kinross-based wooden play equipment company, a wooden play structure was added to the area, as well as grass safety mats; the setup complements the 200 exterior covers at the venue.

Sarah Jones, director of Caledonia Play, told SLTN that by talking Neil and Michael through the options, the firm was “able to provide a fun solution, creating a play area that would keep children entertained but which was safe”.

“I think come the summer this will look really good,” said Neil, who added that, in his view, “there’s a gap in the market for folk who want to come along with kids and have nice food, nice drinks, nice cocktails; hopefully we fall into that bracket”.

When it comes to food, it is very much Michael’s domain.

“I think with Michael’s background in food and he’s the chef in the Sunday Mail, done TV work, it’s just good grub – and really that’s what we’re trying to do,” said Neil.

The approach to the drinks range is in a similar vein. Working with suppliers such as Tennent’s, Wildflower Wines and Matthew Clark, Neil said quality is very much the watchword.

“We’re only using quality products; we only use premium [products], we only pour with Absolut – we don’t use any cheap products,” he said.

Each component – from the food and drinks to the outdoor area – feeds into the positioning of the venue as a quality, family friendly outlet for all.

And it’s this approach which inspired The Dapper Squirrel’s name; with the squirrel on Kilmarnock Football Club’s crest, the idea came to the pair to tie in with the area – and have a bit of fun.

“We just quite liked the silliness of it, and I tell you what – you don’t forget the name,” said Neil.

While a move to Kilmarnock – operating a venue called The Dapper Squirrel – was not something Neil could have predicted, he’s relishing the new challenge.

“I’m surprised myself that I’m here, [but] in actual fact I’m really enjoying it,” said Neil.

“It’s certainly given me a bit of a buzz back again.

“This has relit my fire”.