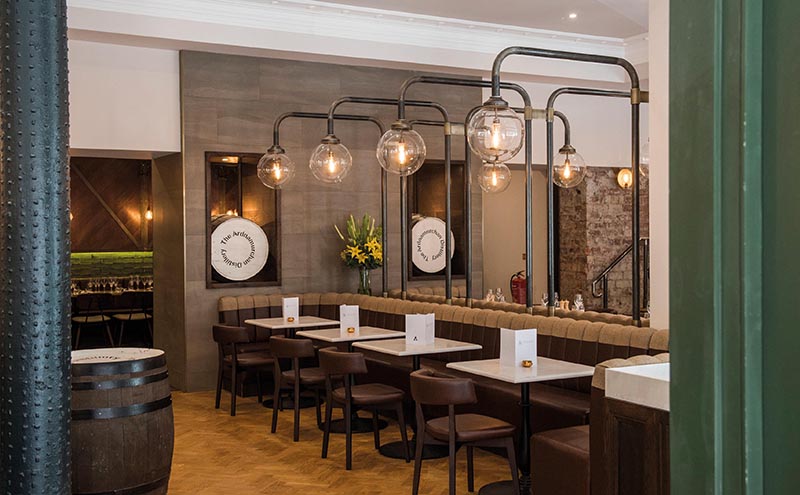 LOCATED in the heart of Scotland’s west coast, an hour’s drive south from Mallaig, sits the remote area of Ardnamurchan, a 50 square-mile peninsula that provides mainland Britain with its most westerly point, Corrachadh Mòr.

The land is off the beaten track of the Highland tourist route, accessible only by a single-track road.

Now, a little bit of the peninsula has been brought to Glasgow by husband and wife team, Neil and Julie Douglas, in the shape of Ardnamurchan restaurant, which champions the produce of the area.

Julie grew up in the secluded little corner of Scotland and her family lineage has been traced back in the area as far as records go.

We are keen to build up a good body of regulars that live in the city.

“My mother Iona’s side of the family has been in Ardnamurchan since before the Highland Clearances,” explained Julie, the restaurant’s general manager.

“It has not changed an awful lot in 20 years; there’s still no broadband.

“In my last year of high school, I had to get the boat between the mainland and Mull just to go to school.”

“It’s probably one of the most isolated parts of Britain but it’s beyond beautiful, so why not celebrate it?”

Neil, owner of Glasgow Italian restaurant Café Antipasti, joined forces with hospitality veteran Billy Mcaneney and secured a deal with Star Pubs & Bars to develop the site of the former Trader Joe’s on the city’s Hope Street; and Neil and Julie were keen to do something different with their native food, having spent over a decade serving Italian dishes in Café Antipasti.

“There’s so many places doing burgers and pizzas,” said Julie. “So when this opportunity came along, we sat and talked about what we would do, what would work well here.

“We both wanted to do Scottish food and then Neil had the idea to call it Ardnamurchan and get food in from the west coast.”

Neil said: “Chris had got a bit tired of doing pizza and pasta over and over again so went off to do other things. We had enjoyed working together so we invited him back and he was keen to try his hand at Scottish food.”

While the menu pays homage to the provenance of the region, getting some of the food to Glasgow hasn’t always been straightforward.

“Based on the fact there are not that many Scottish restaurants in the city, we have found that the supply lines aren’t what they could be,” said Neil.

“There’s people making great venison and there’s some great fish being caught just off the west coast. There’s just no great system set up yet to get it to here.

“Our langoustines arrive on a Tuesday night because they’ve been caught fresh on the Tuesday morning and that’s just the way it is.”

The additional effort of sourcing and delivering select food is, however, providing Ardnamurchan with its own unique selling points, said Julie.

“A friend of mine runs the Tobermory Fish Company, so she’s put on a bespoke service for us and we are the only ones in Glasgow that have her smoked trout, straight from Mull,” she said.

The west coast is evident throughout the restaurant’s food and drinks menus.

It’s one of the most isolated parts of Britain but it’s beyond beautiful.

As well as the Tobermory trout, there’s halibut from Gigha and Stornoway black pudding.

There’s also a fledgling list of 50 Scotch whiskies, something that Neil said will grow with time.

The venue itself was brought to life through a £430,000 comprehensive refurbishment, which has transformed the former pub into a light, bright space.

The redesign of the unit was handled by Julie and design firm Arka; although keen on a more rustic design, the ambition of Ardnamurchan’s menus raised the standard of what the place had to look like, said Neil.

In the initial planning stages the number of covers was cut back from 120 to 100 – a decision that Neil said was driven by the standard of the food they wanted to offer.

And the restaurant has already been packed to capacity.

Located just a stone’s throw away from the Theatre Royal and catering to an area which also includes the Pavilion Theatre and the Royal Conservatoire of Scotland, Ardnamurchan offers a pre-theatre menu which Neil said was worked on extensively “so that if we get 100 people that want to come in and eat in one hour we can put our backs into it and do it”.

With an ever-growing number of tourists, who spent an estimated £1.85 billion in the country last year (according to the Office for National Statistics), it goes without saying that Ardnamurchan will appeal to many visitors seeking out regional cuisine; but Neil said the couple are equally keen to develop and retain regular diners from in and around the city.

“We’re keen to build up a good body of regulars that live in the city, that’s more important than tourists who will pass through once and that’s it,” he said.