THINGS could have gone much differently for Kirsteen Campbell, master blender of Scotch whisky giants Cutty Sark and The Famous Grouse.

While studying for a degree in nutrition and food science, Kirsteen spent some time in what could charitably be called the less glamorous side of the food and drink industry.

“I spent a bit of time as a student with a chicken processing company, which was an eye-opener,” Kirsteen told SLTN.

“So I’m glad that my career took a nice turn into the whisky industry.”

That nice turn began with a job at Diageo, which hired Kirsteen as a graduate to work on the production of several of its spirits, including Scotch whisky.

It was in Diageo’s laboratories that Kirsteen would develop a keen interest in the production and flavours of whisky, and she went on to secure a diploma in distilling from the Institute of Brewing & Distilling.

A stint at the Scotch Whisky Research Institute in Edinburgh followed, where Kirsteen studied the different ways distillation can influence flavour.

In 2007 she was recruited by Edrington Group as a whisky quality technologist (essentially a trainee blender) and, ten years later, heads up the company’s flagship blends, Cutty Sark and The Famous Grouse.

It’s a huge role, overseeing the entire production of both blends, from the time the spirit is distilled through its maturation, blending and bottling, as well as working with the company’s marketing department on elements such as packaging and tasting sessions.

It’s excellent to see something go from concept to the back-bar.

She admits it “can be challenging, from a time management perspective”, but it’s obviously a challenge Kirsteen relishes.

And it’s a role that has a very real impact on the products available to Scotland’s pubs and bars.

Before adding The Famous Grouse to her role last year, Kirsteen spent five years as master blender of Cutty Sark. During this time she created several limited edition bottlings of the blend, including the 25 year old Tam O’ Shanter release, as well as two permanent additions to the range: Prohibition Edition and Cutty Sark Storm.

Creating new versions of established whiskies is quite the challenge, as any new product has to retain some of the brand’s established qualities while being different enough to stand on its own.

Prohibition Edition, in particular, was a proud moment for Kirsteen.

She explained: “Prohibition was quite a challenging one to blend.

“Cutty Sark’s all about being smooth and easy to drink.

“We wanted to produce a product that was higher in ABV – 50% – so to blend something that was smooth but high strength was very challenging.

“But the feedback’s been great and it’s still popularly available.”

The innovation is set to continue and, now that Kirsteen has spent some time adapting to her new, larger role, she’s getting the chance to experiment with Scotland’s biggest-selling blended Scotch.

“There will be [Grouse special editions] but nothing I can talk about at the moment, unfortunately,” said Kirsteen.

“There are certainly things in the pipeline.

“There’s one that’s fairly soon. You’ll hear about it this year.” 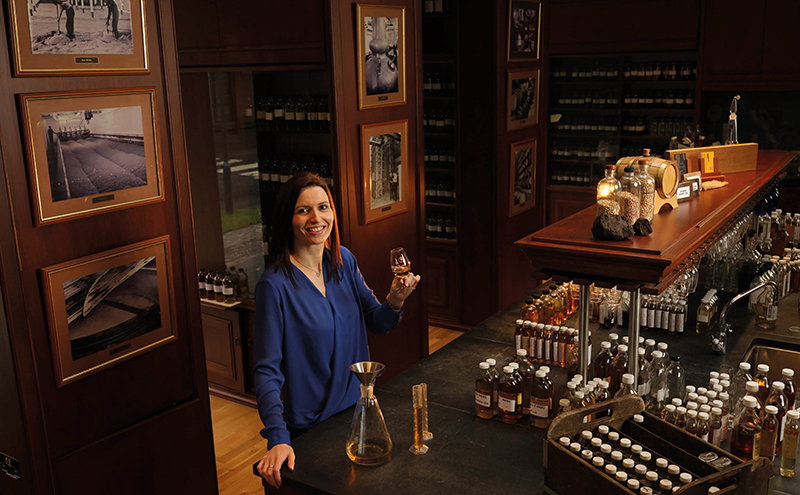 Adding any new product to a range as well-known and long-established as either Famous Grouse or Cutty Sark comes with a lot of responsibility, and the weight of the brands isn’t lost on Kirsteen, who said that she is “first and foremost, a custodian” of the two names.

“It’s excellent to see something go from a concept in the sample room through to being bottled on the line and, even more so, when you see it on the back-bar,” she said.

“You feel a massive sense of pride.”

In the meantime, Kirsteen’s focus is on maintaining the consistency and quality of the core range.

I’m sure I get funny looks when I suggest mixing whisky is fine.

While Kirsteen enjoys the whiskies either neat or served long (ginger beer with Finest, Coke with Smoky Black and lemonade or Appletiser with Mellow Gold) she subscribes to the theory that people should drink whisky however they enjoy it.

“I’m sure I get a few funny looks when I suggest that mixing [whisky] is absolutely fine, but I think it’s a really important point that you want people to enjoy what they’re drinking.

“People freely mix other spirits. Why not Scotch whisky?

“I think, certainly for Famous Grouse and Cutty Sark, I readily endorse that, promote and encourage it.

“But, yeah, I can get a few funny looks at tastings depending on the audience.”

And promoting Scotch as a versatile, approachable spirit is something the licensed trade can play an important role in, said Kirsteen.

She urged pubs and bars to offer whisky in a variety of serves.

“Neat spirits might just be something [the customer] doesn’t enjoy, so offer different serves, different ways to enjoy the blends,” said Kirsteen.

“And I see lots of places doing that, which is great for us.”