Hosting a barbecue can be a quick and straightforward revenue raiser 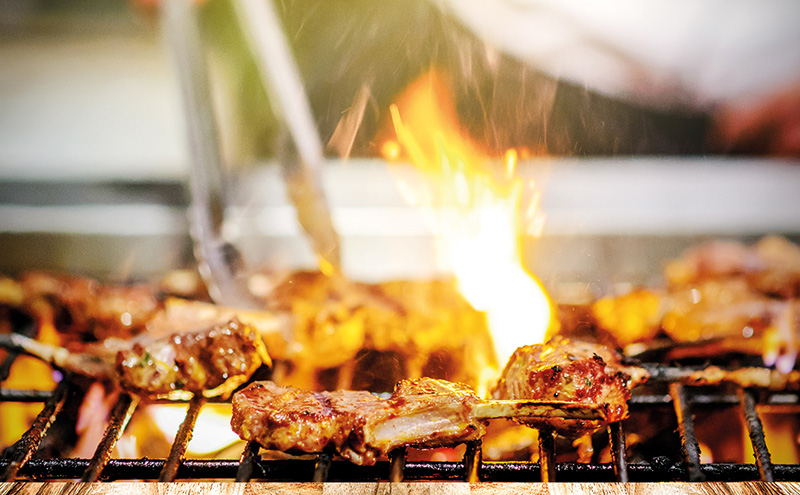 WITH the Scottish summer well and truly underway (in theory, at least) many operators will be looking at ways in which to maximise food and drink sales on the days when the sun shines.

It’s hardly a trade secret that having an outdoor area can result in impressive revenue rises, no more so than when there is a run of weather to match the season.

And the advantages of an al fresco area are said to be multiplied by the simple addition of some barbecued food.

Star Pubs & Bars’ operations and sales director for the north, Gary Corney, said barbecues are a great idea for venues lucky enough to have the space to host them, saying: “Seeing and smelling food being cooked is a great way of encouraging people to eat as well as drink. The smoke and flames from a barbecue provide great theatre and watching a chef cooking on the flame is a great USP for your pub.”

The trend towards barbecued food in recent years has taken the casual dining market by storm, according to James Millward, managing director at Eurilait.

He said: “Grab-and-go snacking occasions are on the rise in line with a faster paced lifestyle and the trend for American inspired BBQ food and outdoor eating is gathering momentum.”

Even the unpredictable weather need not be a deterrent.

Simply grilling some burgers or sausages should be enough to draw in extra revenue.

“It should be fairly easy to put on a basic barbecue menu at short notice if needed,” said Hall.

“If high levels of customers are expected when the sun shines, simply grilling some burgers or sausages should be enough to attract attention and draw in some extra revenue.

“Few can resist the smell of a barbecue on a summer afternoon and [venues] can offer a simple barbecue menu without a great deal of expense or planning.

“Forward planning is possible by ensuring you are prepared for the worst.  Create covered seating areas with gazebos and marquees so customers will still be able to enjoy an outdoor event.”

However, exactly what and how to cook at such an event is certainly up for a little debate, as new flavour trends, options and nutritional choices contend with traditional classics.

There is also a growing desire to eat as healthily and cleanly as possible.

All this presents operators with plenty of food for thought.

He said: “Before creating a menu consider the type of event, the number of customers you expect and the skill level of the person doing the cooking.

“The food you offer needs to be cooked quickly so bear this in mind when choosing meat cuts.

“Consider who you’re looking to attract, as you can barbecue almost any food. Offer fish, chicken or vegetables as healthy alternatives to red meat.

“Don’t forget to cater for vegetarians and if offering a gluten-free option promote the fact.”

There’s not much that can’t be cooked on a BBQ. If you can skewer it you can cook it.

An attractive way to upgrade a barbecue offer, increase takings and stand out from the crowd is to “cook speciality burgers and sausages from a local butcher”, said Corney.

Cinders Barbecues’ Karen Swift said licensees can use a surprising range of foods for a “pop-up BBQ”.

“There’s not much that can’t be cooked on a barbecue, so take a look at what you have and use it,” said Swift.

“If you can skewer it you can barbecue it. Chicken can be marinated in yoghurt and spices and cooked on skewers with courgettes and cherry tomatoes – serve with flat bread for a twist on a chicken tikka.

“A great standby are good old fashioned minute steaks from the freezer served on toasted buns with fried onions and peppers – these always go down well.”

Delivering higher quality and making the ritual of the grilling more experiential for a venue’s clientele have also been signposted as ways to host the perfect on-trade barbecue.

A spokeswoman for Eurilait said: “Caterers wanting to tempt more customers should bring a little theatre to their operation and look to cooking methods such as wood-fired, smoked and slow-cooked, to entice diners with a visual and sensory experience.”

However, companies also sounded a note of caution around certain foods.

A growing trend towards rare burgers in recent years has created problems for venues and even been addressed by the Food Standards Agency.

A spokeswoman for thermometer firm ETI explained that the problem is down to burgers being minced, meaning the core of burgers is also exposed to the risk of harmful bacteria, unlike steaks.

“Colour is no longer an acceptable way to ensure against bacteria being present in food,” she said.

“Chefs are aware that sometimes mince can change from pink before reaching temperature and some mince can stay pink after reaching the target temperature.

“Time and temperature are the new industry buzzwords. It is widely recognised that [meat checked at] 70°C for two minutes or 75°C for 18 seconds is sufficient to kill all harmful bacteria present in burgers.”

Promotion: there needs to be signs or a banner promoting your barbecue. Staff also have to let people know there is a barbecue available.

Staffing levels: if you’re holding a barbecue, it is important to have staff on hand to manage the incremental trade.

Stay stocked: ensure the bar is well stocked – when the sun comes out, record sales can be achieved.

Ready to go: make sure the BBQ has been fired up in advance and the chef has tested his menu prior to the event.