THE latest edition of the Amarone Cask Finish single malt has been released by Isle of Arran Distillery – six months after the last batch sold out. 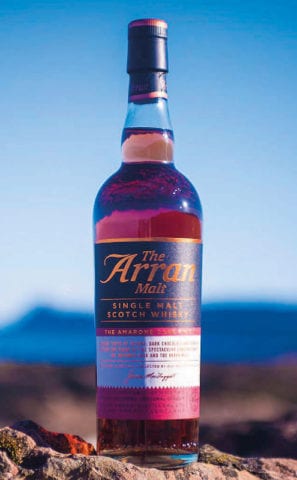 After initially maturing in traditional oak casks for a number of years, the Arran malt in the latest bottling was finished in a selection of Amarone wine casks said to have been sourced from an artisan producer of the Italian red wine.

Isle of Arran Distillery said the latest release is bottled at 50% ABV for “concentration of flavour and aroma”, and has a nose of poached pear and honey and a palate of dark chocolate and cherry.

James MacTaggart, master distiller at Isle of Arran, said: “The Amarone Cask Finish has to be one of our most popular limited editions with demand growing for each new expression.

“We’re just as proud of this latest bottling as we were the first and look forward to it being enjoyed by fans of The Arran Malt everywhere.”

The launch comes after Isle of Arran Distillery broke ground on the site which will be home to its second production facility.

The new distillery at Lagg, in the south of the island, will include a visitor centre and warehousing, and enable the Lochranza-based producer to increase capacity to 1.2 million litres. There are plans to dedicate production at Lagg to more heavily peated single malts.