Quality is king at Edinburgh’s Forage and Chatter

DESPITE being one of the more recent additions to Edinburgh’s dining scene, Forage and Chatter on Alva Street has already built up a bit of a reputation.

The venue sits tantalisingly close to the top of the city’s Trip Advisor rankings with bookings filling up the former Edinburgh Larder Bistro site.
For owner Cameron McNeil, the ingredients to his venue’s early success are easily identifiable.
“I think there’s three things to that,” McNeil told SLTN.

“Quality and price point are two of them but [creating a] relaxed dining atmosphere rather than having to go somewhere with table linen and have a stuffy surrounding where no one speaks.
“That is the difference. That is how the market is changing.”
Getting the atmosphere right was a high priority for McNeil when he picked up the keys to the Alva Street unit on August 24 last year.

With doors opening in October, McNeil drafted in his brother Nicholas Atterson, a former electrical mechanical engineer in the army, to lead the charge on the refit.
And there was no shortage of work to be done, with the venue “peeled back to nothing”, said McNeil.
On entering Forage and Chatter, guests can now be greeted at the custom-built bar by the front door while they wait for their table, the first new feature from a long list of renovations. 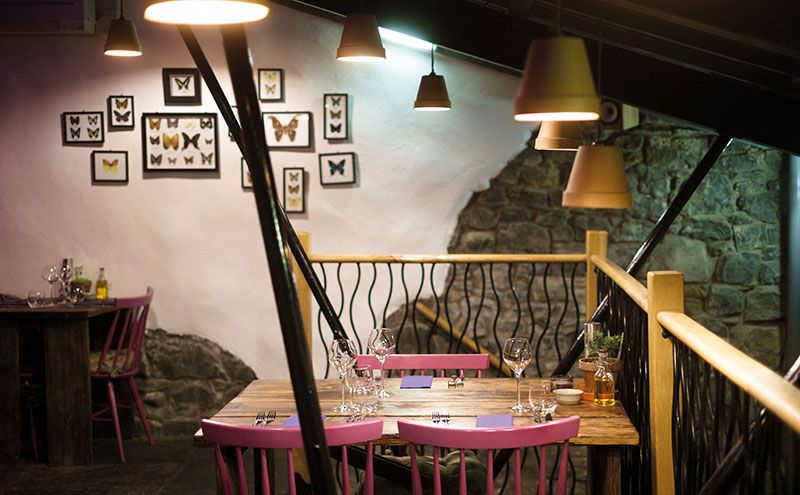 Bespoke fitted seating, complete with tartan cushions and hand stained and varnished tabletops line the walls of Forage and Chatter, while references to local sourcing can be seen throughout.

Whether it’s framed taxidermy butterflies, herbal foliage on the tables or paintings of various mushrooms and fungi, some of which can be found on the menu, the restaurant’s interior isn’t shy about sticking to a theme.
And it’s a theme that’s clear throughout, including in the restaurant’s conservatory-esque dining area, which is located through what would formerly have been the unit’s back steps and benefits from under-floor heating and a roof that keeps out the cold while letting in the light.

All of this is about creating the right atmosphere, according to McNeil, who reckons the dining experience is key to bringing customers through the door.
“Something that Gordon Ramsay said 15 years ago: always be looking with customers’ eyes and see what you’re doing,” said McNeil.

I put my heart and soul into it or I wouldn’t bother.

“You don’t want to be blowing your nose behind the bar, don’t be taking your phone out, because you don’t know what the guest sees.”
McNeil is no stranger to strict high standards; before starting out on his own with Forage and Chatter the restaurateur cut his teeth working at Robin Hutson’s Lime Wood Group.
In his half a decade working for the firm behind a number of luxury hotel, restaurant and spa venues south of the border, McNeil worked across almost all areas of the business – experience which he reckons has been useful for his new venture.

“There is certainly an advantage of having done every area,” he said.
“Even if we’re just talking about a restaurant specifically, having done housekeeping at a five star level you know how clean a room should be so you know how clean your restaurant should always be.
“Then obviously the food and beverage side, that excels because of a great passion for great service.”

McNeil definitely has a passion for great food and, having worked under Michelin-starred chef Angela Hartnett at the Lime Wood hotel, spa and restaurant in Lyndhurst, he’s been keen to replicate that quality of cooking in Edinburgh.
Local sourcing is at the heart of the Forage and Chatter menu, which offers Perthshire chicken breast, west coast hake and Scottish salmon, and McNeil said the dishes are presented to diners without any airs.

“There is no French terminology on my menu because we’re Scottish,” he said. “There’s no ‘creme brulee’, if there’s an English way to describe it we’ll describe it but there’s no French terminology.”
Serving up fine dining level food across two services over five days is not a low bar, and McNeil reckons he’s putting in 100 hours per week at the moment. And as things move forward at Forage and Chatter, that’s not something he can see changing.
“That’s what I’m used to,” he said. “Either I put my heart and soul into it 100% or I wouldn’t have bothered doing it.”