YOU wouldn’t know to look at it, but there is a direct link between the refurbished Belmill Hotel in Bellshill and the Scotland of the 16th century.
According to Scotland’s National Library, Timothy Pont drew up the first detailed maps of the country in the late 1500s. The earliest record of settlement in the Bellshill area is a village, originally known as Belmill.
It’s from this that the owners of The Belmill Hotel took inspiration when renaming their business.
And it’s clear that this degree of carefully considered thought and planning has been applied to the
entire refit.
Owned by the independent operators behind Bozzco Inns, Martin Mackay and Frank Cogan, The Belmill Hotel is part of an estate that also includes The Stewart Inn in Stepps (their first pub); The Cellar Bar in Airdrie; and the Union Inn in Falkirk.

We’re chuffed with it because it’s not at all what you’d expect to find in Bellshill.

But where this outlet differs from the others is that it’s a multi-purpose site, incorporating a pub, restaurant and hotel.
Martin told SLTN: “We took it as a natural step forward; going from wet-led to food-led. And [when] this came on the market, we bought it on its potential. This is what we thought about doing since day one, it just took us longer to achieve the dream.”
Formerly trading as Chaplin’s, the venue previously had an older clientele, according to Martin.
The intention was to completely transform the site, with Martin explaining “we were just looking for something where you go and get a bit of everything”.
Working closely with Stephen Paterson of Burns Design, the refurb plans included adding a substantial extension to the rear of the pub.
The expanded venue now boasts capacity for 136 covers and is essentially split into zones.
Each of these areas is split by slight variances in height. Ramps feature throughout The Belmill, and were an important feature of the design, according to Martin, who said the aim was to create a venue that was “family-friendly, and with disabled access”. 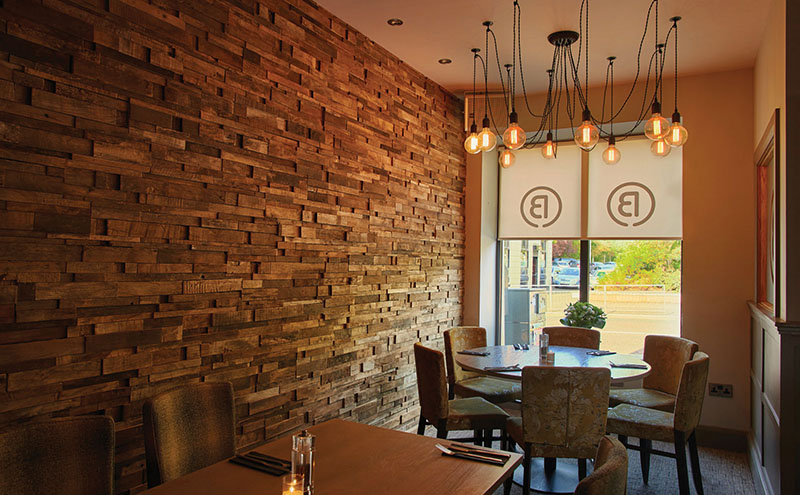 “We’re one of a few restaurants, I reckon, where if you’re disabled you can come in and actually sit at any single table – full access to the entire restaurant,” said Martin.
As well as priding themselves on their inclusive design, Martin and Frank also ensured their multi-functional space had another unique factor: a semi-enclosed outdoor area.
Featuring slatted walls that admit air into the area, and with a large chimney breast dominating the centre of the space and two large televisions positioned either side, the covered space is designed to offer a comfortable area for smokers.
Another feature of the outdoor area is a large mural, painted on the rear wall.
It was created by Belgian street artist Dzia, who was flown in by Heverlee parent firm Tennent’s for the job, and Martin explained that this has inspired the name of the outdoor area: the ‘Fox’s Den’.
Situated upstairs, away from the main public area are The Belmill’s four bedrooms.
All four are double en suite rooms, featuring modern fittings and neutral colour schemes.
Frank reckons they match the quality customers expect in Glasgow and Edinburgh.
However, the £1 million renovation was not all plain sailing.
“The biggest mistake was not having a professional dedicated project manager,” admitted Frank.
Martin agreed, adding that the project brought a few unexpected challenges.

The [most] pleasing thing is people coming in and saying ‘Bellshill needed this’.

“We had a lot of problems; we actually had a digger in here,” he said.
“We discovered the building had sunk by nine inches, so we had to pin it and put steel beams in.”
Another issue they faced was the installation of bigger lines to bring electricity and gas into the building, resulting in works totalling £40,000.
However, working with Bathgate-based firm Warrington Property Maintenance, these hurdles were overcome.
Since opening the bar/restaurant area in December of last year, and the rooms in June, footfall is said to have surpassed expectations.
The business has benefitted from trade from the likes of Edinburgh and Glasgow over the summer.
“We did really well out of the Edinburgh Festival,” said Martin.
“Next year we’ll market [the venue] completely differently.”
But festivals aside, Frank reckons the demand has always been in Bellshill.
He said: “The most common phrase we hear [from customers] is ‘Bellshill needed this’.”
He added that the venue is “giving people a reason to stay in the town rather than going to Glasgow”.
While The Belmill’s food offer is perhaps not what customers expect to find in Bellshill, Frank emphasised that it is not “fine dining”, but rather, has a “posh edge”.
On the drinks side, wine and cocktails continue to be the most popular, with The Belmill serving a predominately female clientele, according to Frank.
Working with a few select suppliers, Frank and Martin use Tennent’s (bottled beer and draught), Inverarity Morton (wines and spirits), Campbells Fresh Meats (butcher meats) and Brakes (various foods).
Sims Automatics was recruited to supply electronic equipment, including the sound system, CCTV, plasma and LCD TVs and a games machine.
Martin described the company as “absolutely brilliant”.
“They’ve been with us since day one and we’d recommend them to anybody,” he said.
Commenting on the company’s involvement, Sims Automatics’ Neil Fleming said having worked with Frank and Martin over the years they have “become very good friends” and this was “their greatest adventure together to date”.
Since the renovation has been completed, Frank said it has been well-received in the area.
“Three women sitting having afternoon tea in Bellshill – just something you’d have never perceived,” he said.
With business surpassing initial expectations, Martin and Frank are already looking to the future.
Having begun negotiations for the flats next door, the pair are looking to add another eight to ten rooms to the hotel.
Martin said: “We’re already thinking forward. The worst thing you can do is stand still and think ‘that’s it been completed’; we now know what our next changes are.”