Bread Meats Bread gets going in the west end 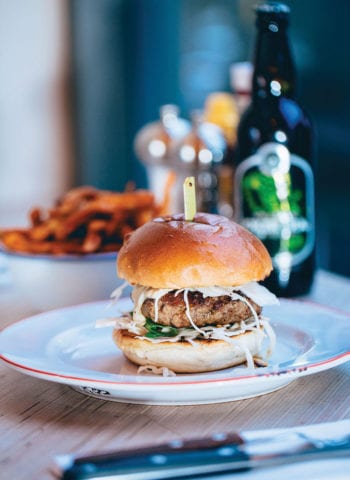 FOLLOWING the financial meltdown of 2008, more than a few high street banks have been left vacant, but there aren’t many that have been transformed quite like the former Bank of Scotland on Glasgow’s Great Western Road, now home to Bread Meats Bread.
The third iteration of a casual dining brand launched in 2013, the latest Bread Meats Bread represents the biggest job yet for the Avdyli family behind the business.
“It was a long one, five or six months,” said Luli Avdyli, who shares Bread Meats Bread directorial duties with his brother Luan.
Taking on a former bank definitely provides some enviable features, including the venue’s restored ornate cornicing and the exposed brickwork of heavy-duty stone walls built to keep out more than the weather.

There were vaults downstairs, it took about a week to get them out.

But the same sturdy structure brought challenges in equal measure as Luli and his family, with the help of design firm Arka and contractor Pro Concept as well as catering equipment supplier New Concept, set about transforming the unit into an inviting restaurant.
“Number one (challenge), to be honest: we underestimated how many ceilings and walls had to be restructured,” said Luli.
“The safes themselves – there were three vaults downstairs – and it took about a week to get them out.
“Taking the safes out we had to get a company in to structure the walls and make sure one by one they can come out. So that was a challenge.”
With the hard structural graft behind them, the interior of Bread Meats Bread West End is now far removed from that of a financial institution.
The biggest change to the interior is the open feel that has been created, thanks to the removal of old bank offices and interview rooms, as the team was insistent that space and visibility were paramount.
“We wanted people to feel more comfortable,” said Luli.
“Every wall we wanted to take, literally we only left pillars.
“It’s easy (to achieve) if it’s walls like plaster, but when it’s structural stuff, cement and whatever, that’s obviously very difficult to do.”
It may have been a tough job, but it was worth it for the openness, said Luli. And the team was also able to make good use of the structures that couldn’t be removed.
At the heart of Bread Meats Bread West End is a load-bearing wall almost exactly in the centre of the venue.
That wall has now been repurposed as the division between the venue’s open kitchen and bar area, adding a bit of theatre to the dining experience as well as allowing aromas from the kitchen to filter out to the diners. 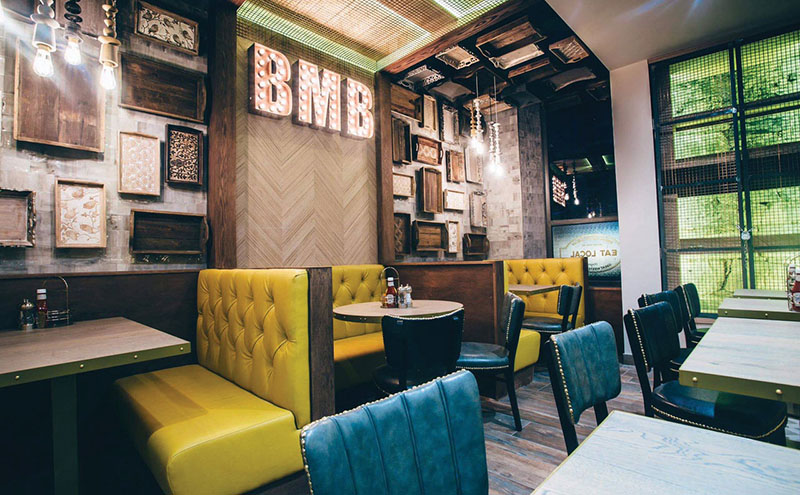 A horseshoe bar which pens in both the kitchen and the drinks service was constructed as part of the refurb and its marble tops and sides accompanied by bespoke dark wood panelling make for a striking feature visible from any spot in the restaurant.
The main dining area is not devoid of new features either. Exposed walls are illuminated by hidden spotlights and there’s a feature wall to the rear that’s bedecked by an array of sturdy-looking wooden dining trays organised around the copper-formed frame of the initials BMB, which are in turn illuminated by small exposed Edison-style lightbulbs.

We wanted people to feel comfortable, we wanted to take out every wall.

Beyond the main dining area, a private dining spot has also been created, available for booking between 11am and 5pm, in what was formerly an interview room at the rear of the bank.
When combined with a newly-constructed raised dining area complete with semi-circular fixed booth seating on the back wall, the total capacity for Bread Meats Bread hits 80 covers, almost doubling the brand’s diner count when added to the 50 in Edinburgh and 40 covers at the original Glasgow St Vincent Street site.
The rapid expansion of Bread Meats Bread since it first opened its doors in 2013 is undoubtedly a tough challenge, but it’s one that’s been made manageable by the strong spine that comes with operating as a family business, with everyone chipping in.

He’s the guy behind the product, he’s got a lot of experience, he’s our burger guru.

Luli and Luan, both formerly of G1 Group and only leaving their operations roles with the firm just over one year ago, give direction to the firm, but brother in law Ylli Dushi is “the genius”, according to Luli.
“He’s the guy behind the product,” he said.
“He had his own restaurants as well, he had American diners and he worked in top places in London so he’s got a lot of experience. He’s our burger guru.”
Ylli’s burgers have certainly proved popular with critics, attracting strong reviews everywhere from the broadsheets to the patty-focused James vs Burger blog. And with the expanded kitchen space of the new site, Luli said his product man is able to make an even bigger impact by expanding both the burgers and sides on offer.
Luli and Luan’s sisters haven’t shied away from the business either. Three have taken on a duty manager role at a unit: Lulja in the new west end site; Tiki in Edinburgh and Beki on St Vincent Street, while Lirie heads up HR.
Luli added that Bread Meats Bread West general manager, Dermot Farrell, has also been instrumental in getting the new site up and running.
The GM joined the Bread Meats Bread team with no industry experience on day one and has worked his way through the ranks.
Bread Meats Bread has gone from nought to three units in quick succession, but there are certainly no signs that complacency is setting in, with another big project coming soon.
“We’ve got a new concept, we even have a unit,” said Luli.
“We’re going for a posh gourmet, Mediterranean kebab (restaurant).”
Casting aside the ordinary perceptions of kebabs, and opting for a Josper rather than a roller grill, Luli intends to beef up the gourmet credentials of Mediterranean street cuisine in much the same way Bread Meats Bread has gained praise for its burgers.
Work is already underway on the new Glasgow city centre venture, with a target opening date this spring.