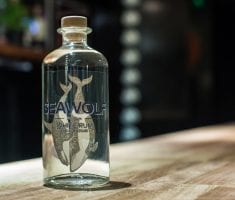 Through their new company, Boilermaker Drinks Co, the trio has launched SeaWolf, a 41% ABV white rum that was distilled at their own distillery after an 18 month development process.

Tasting notes for Sea Wolf describe the rum has having “notes of unripe banana and sugar cane on the nose” which “give way to tropical fruits on the palate with a faint citrus and spice finish”.

The fermented cane molasses used in SeaWolf, which make up the base of the spirit, was produced at Ogilvy Spirits in Angus.

Mike Aikman said that the trio believes “British rum is about to have its time in the spotlight” and Bolermaker Drinks Co aims “to be at the forefront of this”.

“Scotland is not the ideal climate to be making rum in but we love a challenge so we set about developing a full-flavoured rum good enough to work well straight and as a base for cocktails,” said Aikman.

The first batch of SeaWolf is available on a limited run of 300 bottles.