OPERATORS across Scotland are optimistic that this Christmas will bring another big boost for the trade, and have been planning accordingly. 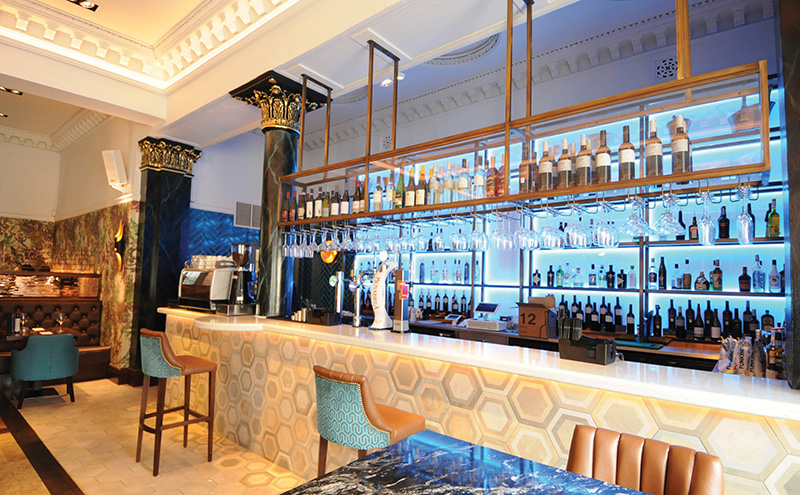 Licensees from a range of different outlets told SLTN that they expect trading to be at least on par with last year, and shared plans for how they intend to keep customers happy in December.
Andrew Barnett, general manager of The Corriegarth Hotel in Inverness, said that he is “expecting to be busy over Christmas”, with festive bookings still coming in.
He added that “it’s generally big bookings we’re taking, [in the] 40s or 50s”.
This was echoed by David Kennedy of Foxton’s Bar & Grill in Glenrothes, who said festive bookings at his venue “are looking really good this year”.
Others, such as Billy Hamilton of the Buccleuch Arms in St Boswells near Melrose, told SLTN bookings are up compared to this time last year.
He said: “[Bookings] are very good, far stronger for the party nights and the office party nights.
“We’re all booked up now, which is good.”
Hamilton added that he is hoping for similar levels of bookings for lunches and dinners through December, which he said are always “a little bit later to book”.
Glasgow operator Oli Norman, who owns four outlets in the city including Sloan’s, Brel, Maggie May, and The Griffin, commented that Sloan’s, in particular, is “insane” at Christmas.

I always believe venues have to have a unique and best quality to them.

As an owner of various outlets, each attracting different custom, Norman was of the opinion that each outlet’s festive plans must be treated differently.
He said: “I always believe venues have to have a unique and best quality to them. So what are you doing better than anyone else and what’s unique to what you do?”
He cited the Christmas ceilidhs held in Sloan’s every year as an example of something that is “hugely unique” to that venue.
Rory Watson, operations manager for the Riva Restaurants group, echoed the view of Norman, acknowledging key differences between the Christmas offer at its own restaurants, which include Nonna’s Kitchen and Rosso, both in Kirkintilloch; Camphill Vaults bar and Riva restaurant, both in Bothwell; and Bar Luca, which opened earlier this year in Kilmarnock.
Watson said the differing customer base between the outlets has had an impact on Christmas bookings.
“One of the main differences, for example, between this site [Bar Luca] being in its infancy and Riva, which has built up trade over nine or ten years, is that if you look at certain days in Riva’s booking diary you will see that Christmas Eve and Hogmanay are pretty much full already – and that’s been built up over the years from regular customers who come back every year,” he explained.
“Now we don’t have that [at Bar Luca] so those are the things that we’re trying to build up; that loyal customer base that say ‘let’s go there’ on a special occasion or the Christmas Eve or the Hogmanay.”
It might be Bar Luca’s first Christmas, but Watson is optimistic, commenting that “the Fridays and Saturdays throughout December are all picking up”.
As well as tailoring a venue’s festive offer to both its customer base and its location, Norman reckoned that licensees should try to offer something a bit different to the “bog-standard three or four-course dinner and a disco”.
He said that, for example, Sloan’s has featured a “singing elf” over the festive period.
And Maggie May has its own offer – a ‘Rock & Roll Christmas’, which Norman described as, “basically a rock and roll cover band doing Christmas covers”.
“It’s just a fun environment,” he said.
Watson said the Riva Restaurants Group has also been keen to offer customers something different in its units.
For example, as the group looks to appeal to families, it is offering ‘meet and greet with Santa’ sessions in its restaurants throughout December.
“Basically kids come along with their mum and dad and they get a pizza, they meet Santa, Santa gives them a wee present; we’ve got elves there that play some Christmas party games with them,” he said.
And for the adults, the group’s Bar Luca venue will play host to live acoustic music on Friday and Saturday nights.
There are also differences in the drinks the group is promoting in its outlets.
Watson said: “Bar Luca is certainly more cocktail-led. We do offer cocktails on our other sites but not as comprehensive a menu.”
Watson attributed this difference to Bar Luca’s location in the centre of Kilmarnock, as well as its later opening hours at weekends.
Subsequently, he said, spirits – particularly gin and vodka – are an important part of Bar Luca’s offer ahead of Christmas.
This was echoed by both Kennedy of Foxton’s and Hamilton of the Buccleuch Arms.
Both operators said demand for craft gins has been high in the course of the year, with Hamilton stating that gin is even starting to eat into sales of other drinks.
“We’ve had a huge range of gin here for a number of years now but it really is starting to fly,” he said.
“It’s taking away some of
the wine sales actually.”