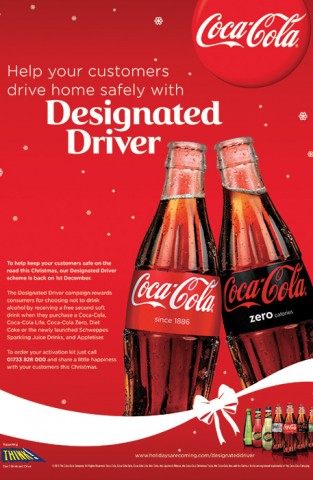 Coca-Cola Enterprises (CCE) has its sights set on designated drivers again this festive season.
The company’s Designated Driver campaign, which is in its eighth year, will be launched on December 1 and aims to ‘reward’ drivers with a free second soft drink when they purchase a Coca-Cola, Coca-Cola Life, Coca-Cola Zero, Diet Coke, or a Schweppes drink.

This year Appletiser has also been included in the line-up.
The focus of the campaign will be on “community-based pub and bar locations” with parking facilities, according to CCE.
To help drive footfall in premises, an online Designated Driver Pub Finder will go live on December 1.
It will be supported by digital advertising to encourage consumers to take advantage of the promotion.
Participating outlets can promote the campaign using point of sale kits and digital signage which thanks “unsung heroes” who take on the designated driver role.
Caroline Cater, operational marketing director at Coca-Cola Enterprises, said: “Outlets see an increase in footfall as people socialise with friends and family more frequently, and soft drinks play an important role during these occasions.
“Our Designated Driver campaign helps our customers to communicate responsible messages to consumers and increase sales, which is why we’ve backed the activity for another year.
“POS material will continue to drive the visibility of the initiative in outlet, whilst the Pub Finder and extended range of products included will help drive footfall and ensure outlets can offer choice to their customers.”