AFTER almost four decades at its former base, independent wine and spirits merchant Inverarity Morton has relocated its Glasgow headquarters. 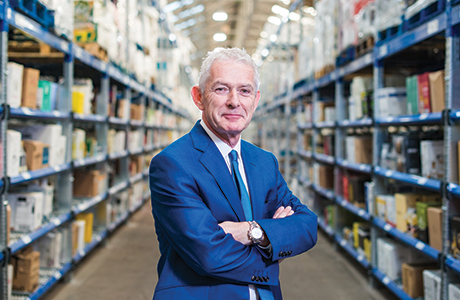 The company invested £3 million in a 100,000 square foot unit in Thornliebank Industrial Estate and last month moved its entire operation from the nearby Pollokshaws unit to the new premises.
The relocation followed an intensive five-month refurbishment of the new site.
Managing director Stephen Russell, who has been with the business for 40 years, said the company had been actively looking for a new depot for some time but had difficulty finding the right site.
He said: “As a wholesale business, we’re delivering goods up and down the country five days a week for our customers so being near a central road network was possibly the most important criterion in our search beyond simply the amount of space we would need to manage the handling and transportation of goods.
“We have simply outgrown our current unit and this site, with nearly 80,000 square feet of warehousing space on three to four acres of land, will see us well long after I’ve retired.”
The unit was purchased by the Bulloch family, who own a 75% share in the drinks wholesale firm, and will be leased to Inverarity Morton.
All 140 of the company’s Glasgow-based employees have moved to the new unit, which in addition to warehousing, provides 16,000 square feet of office accommodation for the firm’s back-office team.
The Pollokshaws site, which is owned by Inverarity Morton and the Bulloch family, is to be rented out.
Inverarity Morton employs more than 200 people at its depots in Glasgow and Milnathort and supplies over 3000 on-trade outlets across Scotland.
Russell said the majority of Inverarity Morton’s workers are based in Glasgow, which meant the move had  less of an impact on their day-to-day working lives.
This was a deciding factor in the move, as well as the proximity to the former Pollokshaws base, he said.
“Glasgow has been our home from the beginning,” said Russell, “and most of our staff live in the locality of the depot, so ensuring the move impacted as little on their working lives as possible was a key concern.”