New beer campaign focuses on quality time in the local

The ‘great British pub’ takes centre stage in a new advertising campaign for Greene King IPA.
The brewer and pub company’s ‘To The Pub’ campaign aims to celebrate British pubs and the “individual spirit, community and authentic moments that happen in them every day”. 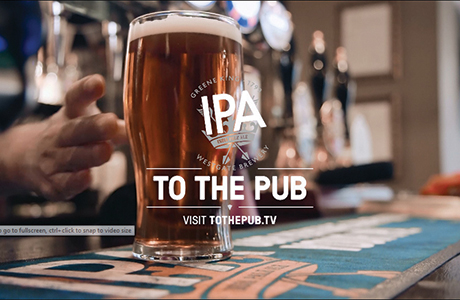 Footage for the new campaign was collected by sending video cameras to publicans in 40 venues across the UK and the resulting advert is made up of a variety of events taking place in pubs, ranging from darts competitions and pub quizzes to intimate conversations and a wedding.
The TV advertising campaign first launched on BT Sport on September 29 and was followed by a social media launch.
All of the Greene King IPA To The Pub adverts will also be available from a dedicated campaign website this month.
Chris Houlton, managing director of Greene King brewing and brands, said the To The Pub campaign “highlights the important social role that pubs play in communities across Britain”.
“By capturing just some of the real, intimate and funny moments that happen in pubs every day, filmed by the people who helped to make those moments happen, our campaign invests in bringing the pub and the value it has within the community to the attention of a national audience,” said Houlton.
“It has been a monumental team effort to create this campaign and we could not be happier with the results.”
Greene King’s other beer brands include Belhaven Best, Old Speckled Hen and Abbot Ale. The company operates more than 3000 pubs, restaurants and hotels across Scotland, England and Wales.