It was a battle of “David against Goliath” proportions when the owners of a nine-bedroom guest house in Kinlochleven took on the might of an internet giant.
Martin and Jacqui Clark went to the Court of Session in an attempt to force Trip Advisor to reveal the identity of two individuals who had posted “malicious” and “fabricated” reviews of their business.
This wasn’t the first time the world’s largest travel site – with an estimated market capitalisation of $10 billion – had landed up in a Scottish court.
Back in 2012, the owner of a tiny bed and breakfast on the Isle of Lewis saw red after reviews were posted which he said were “malicious and factually inaccurate”.
Initially, Trip Advisor contended that Richard Gollin’s claim for damages would have to be considered in the US state of Massachusetts where the company is headquartered.
But then it changed tack, successfully persuading a sheriff that, because of its complex nature, the case should be heard in Stornoway’s “ordinary court” rather than the “small claims court”.
That procedure would have racked up a legal bill that Gollin simply couldn’t afford and he was forced to call it a day.
Enter the Clarks.
They bypassed the Sheriff Court and launched proceedings against Trip Advisor in the Court of Session, aiming to obtain the identities of the negative reviewers so that they could be sued for damages.
But this time the internet giant stuck to its guns, arguing that Mr Clark had accepted the website terms and conditions, which provide that any disputes have to be settled in Massachusetts – although Trip Advisor has an office in London.
The judge accepted that argument, but the Clarks weren’t prepared to give up.
They took another huge financial gamble and appealed to three Court of Session judges – but, again, Trip Advisor successfully maintained that the action couldn’t be heard in Scotland.
At this point, there was only one last throw of the dice: appeal to the UK Supreme Court in London.
It would be fair to describe the potential costs of such a step as horrendous.
Then, according to The Sunday Times (January 25, 2015) a wealthy benefactor – whose identity wasn’t revealed – stepped in to bankroll the Clarks’ case. 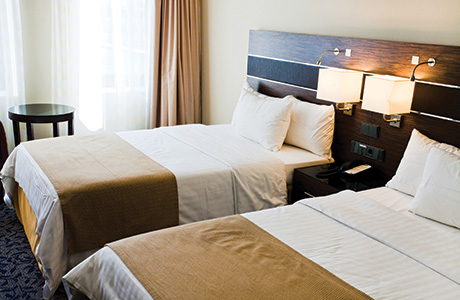 The Supreme Court holds a Trip Advisor “certificate of excellence” as a “visitor attraction” – but would it retain that accolade after its own visit?
Sadly, this is where the story ends.
Leading media lawyer Campbell Deane, who acted for the Clarks, provided me with this statement issued by his clients: “After fully evaluating matters and options, we decided not to proceed to appeal to the Supreme Court.”
‘Bravo’ to the Clarks for having the gumption to take the case so far.
But would Trip Advisor have been in a position to unmask the rogue reviewers by providing useful information?
Signing up to post reviews can be accomplished using a ‘convenience’ email address and a fake name.
It’s likely that the Trip Advisor system will capture a member’s Internet Protocol address – but I’d guess that tracking down the person’s identity by that means would be the work of the devil.
More than 160 new contributions are logged by the company every minute – and although it says that every one is checked by a fraud detection system, you can see the scale of the task.
Then, suppose the real identity of a reviewer was uncovered: that would be a complete waste of money if the reviewer wasn’t in a position to stump up any damages awarded by a court.
Perhaps businesses should follow the example of Glasgow’s Solid Rock Café, recently roasted in a review by a customer who had been ejected for rowdy behaviour.
As reported in the Daily Record earlier this month, bosses exercised their right of reply, calling the criticisms a “steaming pile of guff”.

Don’t fall into the offences trap