Rekorderlig’s seasonal Winter Cider variant returns today (October 1), backed by a new promotional campaign.
The seasonal cider, made from infusing an apple cider with cinnamon and vanilla flavours, is to be the subject of a campaign which will include cider- themed events, new point of sale, social media and digital engagement as well as PR activity. 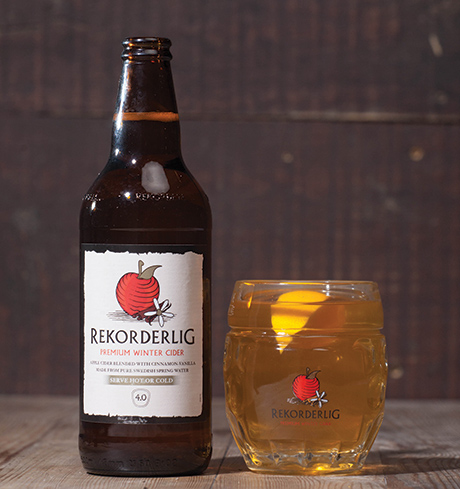 The relaunch of Rekorderlig Winter Cider also sees the return of the brand’s hot cider serve.
This year’s hot serve is said to have been created to accompany Rekorderlig’s new teapot serving vessel, which is being rolled out to a number of outlets.
Rekorderlig ‘Drink Beautifully’ point of sale (POS) kits are also being distributed to a selection of independent on-trade venues.
The kits consist of the Rekorderlig urn – a ‘hot cider serving station’ – branded glassware, teapots, cocktail brochures, chalkboards and Angostura bitters.
Angostura bitters have been included in the POS kits as part of a partnership between the bitters brand and Rekorderlig.
The bitters will feature in a number of cocktails and sharing serves devised by Rekorderlig global brand ambassador Joel Persson.
Point of sale materials are also available to the on-trade from the brand’s online trade shop.
Linsey Adams, customer marketing manager at Rekorderlig, said the brand has gone from “strength to strength” since the winter variant was first introduced six years ago, establishing itself as “the seasonal cider of choice for both retailers and consumers”.
“This year’s campaign focuses on the versatility of Rekorderlig Winter Cider and will inspire debate around both hot and cold serves,” said Adams.
“The campaign activity will give licensees more reason than ever to stock the original winter cider.”
The relaunch of Rekorderlig Winter Cider along with suggested cocktail serves follows the Rekorderlig Jam – a cider cocktail event at the LA Group training centre in Glasgow, which brought together bartenders from across Scotland for an afternoon cocktail creation session.