AN EDINBURGH bar has been named the best pub in Scotland and Northern Ireland for cask ale.
The Stockbridge Tap received the accolade from the Campaign for Real Ale (CAMRA) and is now set to compete for the UK-wide award.

Each pub was judged on its atmosphere, service, decor, quality of beer and value for money before nine pubs were whittled down to one eventual winner.
Run by licensee and general manager Archie Carmichael, The Stockbridge Tap is described as “a specialist real alehouse, offering unusual and interesting beers from all over the UK and occasional beer festivals”.
The award, said Archie, has been a source of pride for his eight staff after the bar first picked up the Edinburgh City and Edinburgh and South East of Scotland awards from CAMRA.
The licensee, who has managed the pub for four and a half years, said he hopes the latest Scottish title will attract even more custom.
“It was amazing to get the award; the regulars and all the staff are incredibly chuffed we’ve won it,” Archie told SLTN. “We will need to see what happens with it.
“We noticed more people coming into the bar after winning the regional Edinburgh award and I expect it’ll have a similar impact. 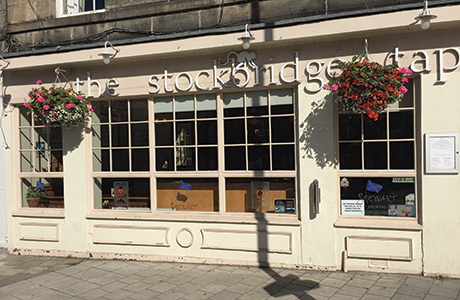 “It’s not an award you apply for. It’s just given to you, so we didn’t really expect it.”
The bar, which also serves food but does not have a children’s licence, is owned by Edinburgh Real Ale – which also owns The Bow Bar and Cloisters, which all have a focus on real ale.
And Archie was quick to distinguish between cask ale and craft beer, which he said has “no proper definition” in the UK.
In addition to his seven cask ale taps, which are in constant rotation, he also provides a selection of other beers, ciders and porters including Tennent’s Lager, Stowford Press, Black Isle Organic Porter, Fürstenberg lager and Belhaven Best.
The bar has two real ales that are constantly on tap – Alechemy’s Ritual Pale Ale and Highland Brewing Company’s Island Hopping.
The remainder of the current selection includes Sunburst by Inveralmond Brewery, St Mungo and Hefeweizen by West Brewery, Black Isle Organic’s Blonde Lager and Black Rat Perry cider by Moles Brewery.
Alternatives on other taps include Ten Malt Teleporter by the Summer Wine Company, Zentner IPA from the Highland Brewing Company, The Pale Armadillo by Tempest Brewing Company, Black Cork by Knaps Beer Company and Kirkstall Pale Ale.
“We try and cater for everybody, but the seven ale taps are where we come from,” said Archie. “The cask beer is by far the largest seller and that’s what we are aiming for.”
The bar last month hosted an Autumn Real Ale Festival which featured some 60 UK beers. It also holds Tap Takeover and Meet the Brewer events where customers can sample ales from producers.
But the wide range of well maintained products are the secret to the pub’s success, said Archie.
“It’s all down to the cellar management,” he said. “What we try and do with the casks is have a mixture of styles and ABVs. You want to have a nice mix of beers.”
The Stockbridge Tap will represent Scotland in CAMRA’s National Pub of the Year contest. It faces 15 bars from across the UK and results will be announced in February 2016.