One of the most well-known and fondly regarded pubs in the west end of Glasgow was recently brought to the market.
The Doublet, on Park Road, was one of the first pubs in the city to serve real ale and has played host to a procession of celebrities, including Keira Knightley, Alasdair Gray and Sir Paul McCartney. 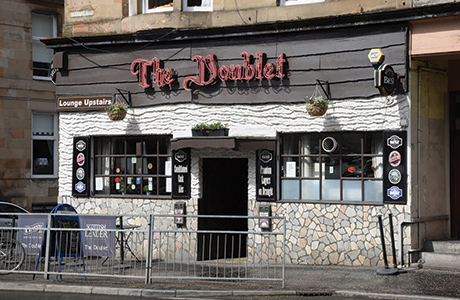 Formerly an upholsterer’s workshop, the pub had been in the same family for 54 years. It survived five recessions and had become an institution in the traditional, drinks-led neighbourhood public house mould.
What is really encouraging for the licensed trade as a whole is that the interest expressed in the wet-led pub by buyers has been unambiguously enthusiastic.
After a short period of marketing by Graeme Smith at Smith & Clough Business Associates a closing date for offers was set and multiple offers were received.
The price cannot be disclosed at this stage but, on conclusion, it is most likely to have been in excess of expectations, demonstrating a degree of confidence and strength in the public house property sector, which will confound the doomsayers.
It illustrates a sea change in confidence in the market, proving that a good site with an existing drinks licence in a good area – it doesn’t come much better than Glasgow’s west end – will still pull in the crowds when it comes to a sale.
What is also interesting, and a sign of the times, is that most of the interest emanated from the independent sector – not, as in the fairly recent past, from pubcos trying to turbocharge their portfolios.
Five years ago such a sale might have fizzled out, with lenders still reluctant to come out of the woodwork, and with the appetite among both indies and pubcos still suppressed.
Not that the pubcos are sitting on their hands.

A few months ago Stonegate Pub Company snapped up 15 Maclay Inns sites across Scotland, after the company went into administration.
But, in general, pubcos are in consolidation mode, if not actively trying to reduce their assets; and lenders are looking for independent potential owners with the right characteristics – that is, experience of running a business, a proven track record and, crucially, a low borrowing requirement.
This may seem slightly weighted against new entrants with new ideas for reinvigorating the sector, but owning a pub is still very much aspirational, and the path to that goal can often be through a tenancy, allowing experience to be stacked up along the way.
So the trend is towards a new diversity in the trade, with significant opportunities for the traditional husband and wife owner-manager teams – and away from the branded, homogenised, same-in-every-high street model.
The new independents, however, will not be immune to inexorably rising operating costs, and the glittering prizes will go to those who lavish care and attention on the consumer and drive footfall with an uninterrupted quality offer which reflects current tastes.
Scotland’s pubs are a hardy breed.
They have ridden out the storms of the smoking ban, the rise in VAT, the major impact of the changes to the drink-driving limit – and now the hammer blow of the proposed living wage increases.
But despite the chill winds of government policy, they still continue to provide a social focus for many communities, and perhaps the new influx of dedicated, independent professionals could be the start of a renaissance for the sector.
Who wouldn’t drink to that?
• Alan Gordon is a partner in the Glasgow North office of DM Hall Chartered Surveyors.