Thatchers Gold is the focus of a new TV advert which aims to highlight the “dedication” of the cider makers behind the Somerset brand. 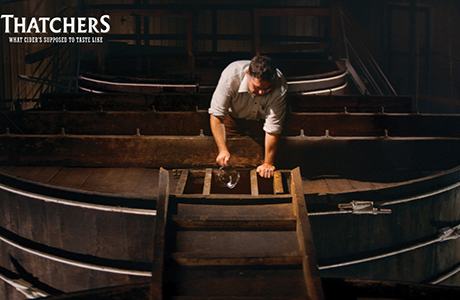 Entitled ‘Time Stops’, the ad was filmed in and around Thatchers’ cider mill at Myrtle Farm in Somerset and depicts the “moment of intense excitement and anticipation” at 12.30 each Friday when the Thatchers cider makers taste the next vat of apple cider to decide if it’s as good as it should be and ready to leave the farm.

Yvonne Flannery, Thatchers’ marketing director, said the new ad aims to “showcase the dedication of the fourth generation cider makers to great taste and perfection, making cider taste the way it should”.

“The film opens on a picturesque sunlit Somerset landscape, taking the viewer on a journey around the local Myrtle Farm community, through the farm gates, towards the 150 year old cider vats, just as the tasting begins,” she explained.

“The degree of slow-motion increases the closer we get to the point of tasting, amplifying the sense of anticipation and drawing the audience into the story as it unfolds.”

The commercial, which will run on ITV, C4, Channel 5 and digital until the end of this month, is part of Thatchers Cider’s new multi-million pound campaign for its “flagship brand”, Thatchers Gold. In June, the cider firm launched outdoor ad campaign, ‘What Cider’s Supposed To Taste Like’.

Thatchers Cider MD Martin Thatcher said: “This new commercial is explaining why we take our tastings so seriously – really focussing on our values, the authenticity of our brand, and our dedication to the art of cider making, great taste and perfection.”