A 21st century country house in the Highlands is set to go under the hammer at Savills in London next month.

Eilean Aigas sits among 547 acres on a private wooded island on the River Beauly, 14 miles west of Inverness.

The mansion house, completed in 2007, has six reception rooms and eight bedroom suites. 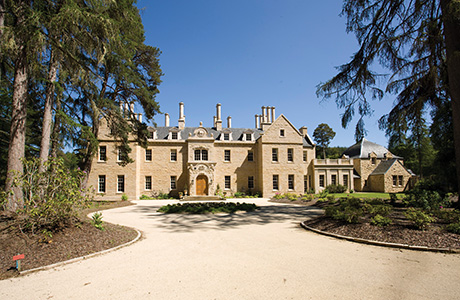 Until 1995, the island belonged to the Frasers of Lovat and at one time was the summer retreat of prime minister Sir Robert Peel.

Selling agent Savills said it is expecting national and international interest with offers in excess of £3 million but added that the estate could be sold ahead of the auction date of September 21 if an acceptable offer is received in advance.

Evelyn Channing of Savills said: “A motivated buyer could prevent Eilean Aigas from reaching the auction by purchasing it by private treaty.

“For this to happen, their pre-emptive bid would need to be at a level which reflects the incredibly high standard of craftsmanship that has gone into the design and build of this beautiful home.

“The family has invested an enormous amount of time, resource and effort into creating and renewing more than 500 acres of historic and beautiful Scottish landscape whilst protecting the wildlife within.”