New campaign marks a ‘shift in strategy’ for beer brand

Foster’s is back on TV screens as part of a new advertising campaign designed to celebrate the ‘Aussie philosophy’ and underline the lager brand’s links to comedy.

Titled ‘Why The Hell Not?’, the new campaign is said to have been inspired by the “‘can do’ Aussie ingenuity and attitude to life”. 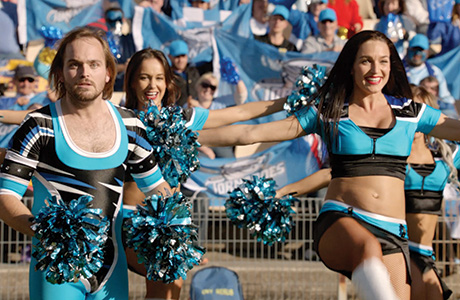 It follows on from the ‘Good Call’ activity and is said to represent a “marked shift in brand strategy” for Foster’s, replacing the ‘no worries’ attitude highlighted by Good Call characters Brad and Dan with what’s described as a “more proactive approach, encouraging audiences to ‘give life a go’”.

The first instalment of the Why The Hell Not? campaign features a character who is said to exemplify the ‘can do’ attitude by becoming Australia’s first male rugby cheerleader.

The new ad, which made its TV debut on Channel 4 late last month, is also appearing across social media channels with the supporting hashtag #whythehellnot. Further content illustrating the new character’s ‘can do’ attitude is available on social media.

“Consumers’ outlooks on life have changed – people want to give things a go and share experiences leading to a richer life,” said Dozie.

“The Why The Hell Not? campaign taps into this thinking.

“The campaign maintains the brand’s long association with comedy and complements the wider changes we’ve been making to the brand.