A Traditional loch-side inn which is said to occupy one of the finest locations in the west Highlands has been put on the open market for the first time in 17 years.

Situated on the banks of Loch Gairloch, around six miles from Gairloch village, the Badachro Inn comprises a traditional bar with open fire and a 50-cover conservatory restaurant offering views across the loch. 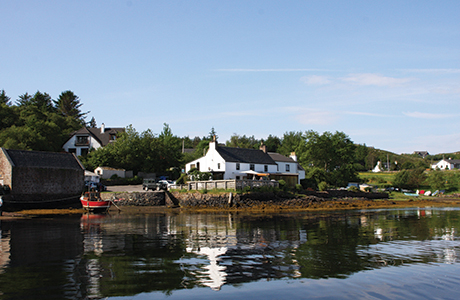 Outside, there’s a large 30-cover decked seating area, which also overlooks the loch.

Service areas include a commercial kitchen, cellar and stores, all of which are said to be well fitted-out.

On the first floor of the property, there’s “well-presented” three-bedroom owner’s accommodation.

The business, which posted net turnover of £334,772 for the year ending September 2014, is said to draw trade from walkers and climbers visiting the area for its mountains, which include Slioch, Beinn Eighe, Liathach, and Beinn Alligin, as well as outdoor enthusiasts travelling to the area for sports such as sea kayaking, diving, sea fishing and surfing.

The inn also attracts business from the yachting fraternity as well as local trade from the nearby village of Gairloch and the surrounding area.

Euan MacCrimmon of Strutt & Parker, which is marketing the property with a price tag of offers over £550,000, said the inn has established a strong reputation for its food.

“The Badachro Inn is in a fantastic spot and it is no surprise that it is an extremely successful business,” he said.

Martyn and Lesley Pearson, who have run the Badachro Inn for the past 17 years, said: “We’ve had a great time at Badachro but we want to move on to new ventures and know that there is someone who will love this place as much as we have.”