On more than one occasion, Morean Hamilton has been asked just how she got the perfect licence plate for her latest business venture, but it turns out that her vintage double decker has always had the ideal registration for its new job – ‘ABV’.

It’s appropriate, then, that this is the bus Hamilton chose to bring out of retirement for her pop-up bar business, The Thistle Vintage Bus Bar. 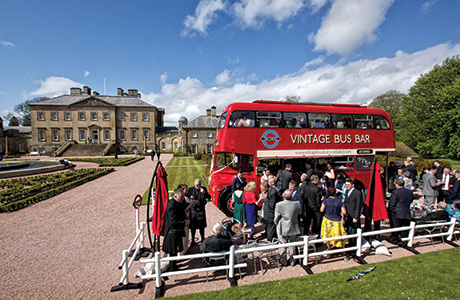 Hamilton, who owns the Thistle Bar in Hurlford near Kilmarnock, said she knew “straight away” that the bus would be perfect for her needs when she picked it up from a private collector in Somerset, who had kept it in good enough condition to allow for a revival.

“The paint was old and dry but there was no rust, [the bus] had been really well looked after,” said Hamilton.

The bus, a 1964 Leyland Titan which was in service in Blackburn for over 20 years, has been restored, refurbished, and fully prepped to cater for a range of functions, including weddings and corporate events.

But for all the bus was in great condition, there was still plenty of work to be done to get it up to scratch before heading on to the road.

Hamilton picked up the vintage bus, which has since been christened ‘Barney’, in October last year, marking the beginning of a restoration and refurbishment project that extended through to May.

The bus itself was restored and repainted red by John Scott Transport, while ABP Signs ensured the authentic feel was preserved by recreating destination roller blinds from material ordered from Germany to get as close to the real thing as possible.

But while restoring a vintage vehicle would be task enough for some, adding a bar to the process brought additional obstacles.

“First off, the challenge was we had [bought] the bus before talking to anyone about it,” said Hamilton.

She had the idea for a converted bus bar, but she also knew the project would need brand support if the vision was to become a reality.

“We had to get a brewery to buy into the idea, to help kit it out,” said Hamilton. 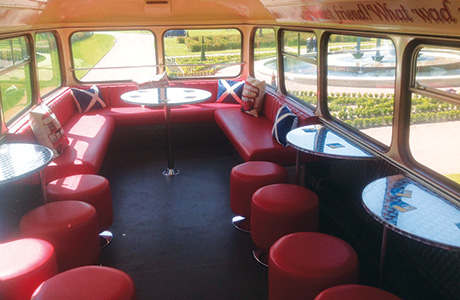 “When we talked to Heineken they were on board straight away.”

Heineken has backed the project by installing six draught fonts in the Vintage Bus Bar, which has a capacity to store nine kegs on the ground floor – “more than the cellar in some small pubs”, Hamilton noted.

Draught beer on the bus bar is served from the bottom deck, which has been converted into a bar area and makes up the “staff only” section of the vehicle.

In addition to the draught fonts, the bus also houses two drink chillers as well as a range of spirits on optic.

Many of the less aesthetically pleasing aspects of the bar have been cleverly stowed away aboard the old Leyland.

The gas and coolant for the draught taps have been tucked away in a cupboard to the rear of the bus behind the back wheels, with a staff cleaning station hidden in the opposite cupboard.

When on the road, the bus, which operates under an occasional licence, is backed up by a support car which brings with it both the bus bar staff, who are on rota from the Thistle Bar, and a climate-controlled trailer which keeps extra stock cool. The trailer also maintains the vintage bus motif with a red bus design wrap which was created by Owen Pilling Graphics (OPG).

When on site, the bus runs on its own steam, thanks to a marine diesel generator stored in a side compartment and accessible from the exterior.

At £15,000, Hamilton acknowledged that the generator itself was no bargain, however she said the noise reduction that comes with the price tag makes the expenditure worthwhile.

The sound track for the bus bar is provided by a Denon sound system with a USB connection which pipes music to the upper deck, which is occupied by the bus bar’s guests.

The top floor of the ’60s double decker has been sympathetically restored to create a functioning bar lounge without sacrificing the overall feel of the vintage vehicle.

Much like the exterior, red is dominant on the bus bar’s top deck, from the red booth seating to the 15 red stools providing enough space to comfortably accommodate 30 people.

Original features have new roles to play as part of the refurbishment. The chrome passenger grab poles have been cut back and now serve as supports for drinks tables.

The seating has also been designed to be low enough to allow guests to look out from the bus window, while the old advertising slots above the windows now bear two quotes; one old and from Ayrshire bard Robert Burns, and one new of Hamilton’s own design.

Both quotes were hand written by Frank Carty of Artisan Artworks, who was responsible for sign writing on the bus interior and exterior.

The biggest gamble taken with the top deck of the bus would lead to the vehicle’s showpiece feature: a retractable roof.

“We had it in mind that an open top bus couldn’t work in Scotland, but we wanted it to have something different,” said Hamilton.

“We designed it ourselves with West Fab Engineering. We wanted it to be in keeping with the bus as it was.

“It was a bit of a scary day when we cut the roof open.”

The end result of all the work is a pop-up bar concept which never fails to attract attention, according to Hamilton.

“I’ve almost had more pleasure out of watching people seeing it for the first time [than spending at the bar] and it’s almost like they can’t pass it,” she said.

And it’s not just the customers who are impressed.

Hamilton said staff at the Thistle Bar are now “vying for position” for a shift on the bus.