A PUB poker player who throws his chips down at Fife’s Ceres Inn has been crowned UK pub poker champion 2015 at a tournament in Las Vegas.

Gordon Cuthill from St Andrews saw off competition from 99 other players from across the UK to take the top spot at the Redtooth Poker Vegas 100 tournament. 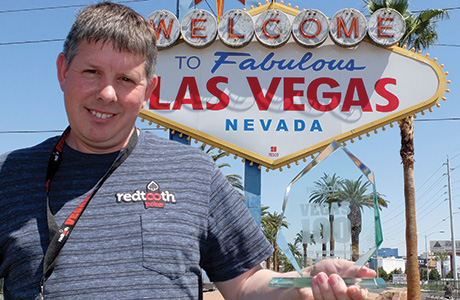 He qualified for the competition final, which formed part of a seven-day trip to Las Vegas, from an initial field of 30,000 entries.

The poker champ said the trip to Las Vegas was a “great experience from start to finish”.

“When I came to Vegas I did feel pretty confident and early on I played a couple of games well which made me think I had a chance of winning the tournament but so did 99 other people,” said Cuthill.

Other Scottish finalists included Mark Henderson, who plays at The Wig in Aberdeen, who finished fourth; Laura Duff, also from the Ceres Inn, who came 15th; and Andrew Harper, from Alloa’s Old Brewery, who was 16th.