Outgoing Scottish Wholesale Association (SWA) president Asim Sarwar has urged wholesalers to put evolution at the heart of their businesses to ensure they continue to meet the demands of an ever-changing marketplace.

Addressing an audience of industry leaders from across Scotland and the UK at the SWA’s annual conference at Crieff Hydro in Perth, Sarwar urged wholesalers to do more to meet the needs of their customers. 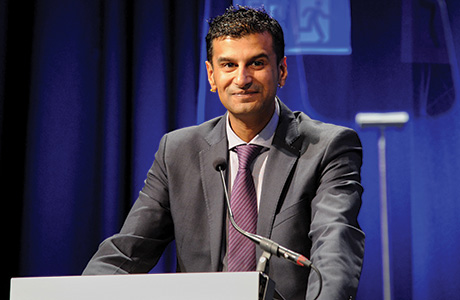 “In any business – and, indeed, any trade association – progress cannot come without evolution,” said Sarwar.

“It’s about understanding what our members’ customers want – whether they are retailers, caterers or other hospitality providers.”

The outgoing SWA president said wholesalers need to do “much, much more to understand our customers”, and said this can be achieved by working more closely with suppliers.

Sarwar also spoke about the evolving political landscape in Scotland, stating that it has “changed beyond recognition” over the past year and that it is the SWA’s job to “deal with such change and do our best to influence and challenge our MPs and MSPs”.

The SWA is also willing to work with other associations more closely in the future as liaising with industry has “never been more important”, said Sarwar.

“By liaison, I mean [with] other trade associations as well as with our members and suppliers, other key partners, the government and the charities we support,” he said.

This year’s SWA conference marked the 75th anniversary of the association.

As part of his opening address, Sarwar congratulated a number of wholesale businesses which have also reached significant milestones this year, including Kirkcaldy-based William Yule and Sons, which celebrates its 150th anniversary this year, and Dunns Food and Drinks of Blantyre and Glasgow-based JW Filshill, both of which celebrate 140 years in business this year.

Sarwar said these companies “thrived and survived” because they have evolved.

Taking place over two days, the 2015 SWA conference featured speakers from a broad spectrum of businesses in and around the wholesale industry.