It’s exactly a year since the new restaurant at Number 10 hotel on Glasgow’s south side was launched.

And it seems the decision to convert a former storeroom in the Victorian property, which is located on Queens Drive overlooking the park and New Victoria Hospital, into a dedicated eatery has paid dividends; average spend per head is said to be up and the hotel is selling more in the way of high-end wines. 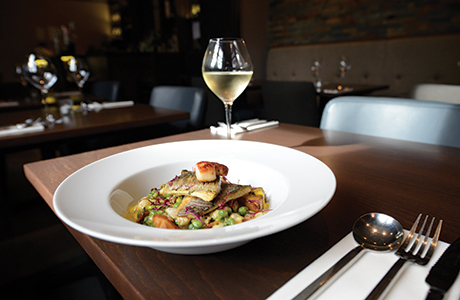 The space itself, adjacent to the bar, was completely transformed during the two-month project last year, which involved knocking through a thick stone wall to link the area to the existing bar.

Both areas were given a contemporary look using a dark muted colour palette; in the Champagne and cocktail bar, original cornicing was restored and paired with a dark wood gantry and bar counter, while a key feature in the 24-cover restaurant is the stone ‘strips’ which cover the walls.

And it has given the business greater flexibility, creating a dedicated dining area and so allowing the 120-capacity function room to cater solely for weddings and events.

But the restaurant – and its subsequent success – is about more than the surroundings.

William has spent 25 years at the hotel, having started as a commis chef when it was called The Dunkeld (the hotel was bought by two Glasgow businessmen seven years ago and rebranded Number 10) and worked his way up to head chef before moving front of house.

Drawing on his chef background, he played a key role in developing the new food offer, together with the kitchen team, which is headed by brothers Gordon and John Wright.

The result is an offer with quality, locally-sourced produce at its heart and a focus on making as much as possible – from pastas to breads – in-house. Dishes on the a la carte menu include starters like Deconstructed Cullen Skink (leek and onion puree, smoked haddock croquettes, fondant potatoes and a potato foam) and mains such as roast venison with a beetroot puree, roast carrots, Duchess potatoes and a red wine jus. 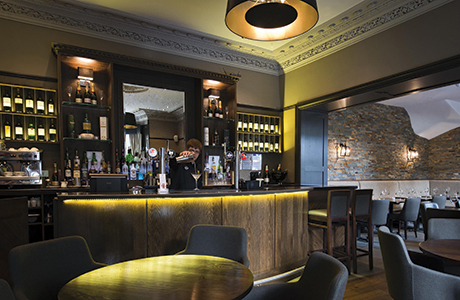 Number 10 works with a number of food suppliers, including Kilmarnock-based Braehead foods and Campbells Prime Meat, as well as a local fruit and veg supplier.

“We order in things like eggs, flour and sugar and everything else is from the ground up,” William told SLTN.

“We make everything we can from scratch in-house; that’s very important for us.

“People are much more interested in food, where it’s from and how it’s made.

“We’ve got a great team in the kitchen; the guys we have are highly trained and motivated. The hotel is much more focused on food.”

Aside from the food focus, the team at Number 10 also turned its attention to the drinks offer, tailoring it to match the quality of the food.

The changes in the bar and restaurant have gone down well over the past 12 months, said William, with the restaurant attracting locals and diners from further afield as well as proving popular with Number 10’s hotel guests (a mix of business and leisure travellers).

The revamped bar and restaurant is the latest in a long-term programme of investment implemented by the owners in the seven years since they acquired the business.

During that time, the hotel has gradually expanded along Queens Drive, with the acquisition of the neighbouring semi-detached property (numbers 14 and 16) adding ten ‘club rooms’ to the 16 bedrooms in the original building (numbers 10 and 12). Gardens to the rear of the property, which the function room opens onto, have been enhanced with timber decking, a wedding gazebo and a marquee area; a water feature is due to be added in the near future.

William said work to upgrade the hotel has been “non-stop”.

But he said the changes are paying dividends.

“The new restaurant was a big job but it was definitely worth it; average spend per head is up and I think it’s lifted the whole place.

“We’re seeing a lot of locals coming in and customers from surrounding areas like Newton Mearns. It’s made a big difference.

“I’ve been here for 25 years and there are different challenges all the time but it’s great to see the owners investing and improving the hotel.”