Hotel sits on most northerly point of British mainland

A NEW owner is being sought for a hotel located on the most northerly point of the British mainland.

Property firm ASG Commercial is marketing the Northern Sands Hotel at Dunnet Head, in Caithness, which is said to be further north than John O’Groats, making it the most northerly part of the mainland. 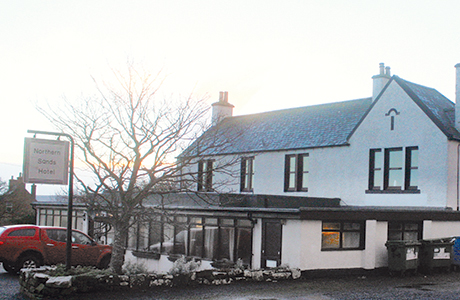 The Northern Sands Hotel has “excellent” public areas, including an “attractively-furnished” function room, which can accommodate between 100 and 140 guests; a public bar and games room; and a lounge bar and dining area, which seats 32 guests and is described as having a “wonderful ambience”.

The hotel is open year-round with slightly restricted trading hours in the winter season; it’s described as a “strong business” producing “sound turnover and excellent profits”.

Jackie MacGregor of ASG Commercial said the property is “attractively decorated and furnished throughout”, adding that the vendors have “maintained all aspects of the property in good order with frequent upgrades in facilities and services”.