THE ‘craft beer revolution’ of recent times has been well-documented, but has consumer demand for a variety of styles and flavours had any impact on the world beer market?

Bartenders in Scotland certainly seem to think so.

Kevin Febers of the Beer Cafe in Glasgow told SLTN he thinks developments in the flourishing craft beer scene in North America are “starting to filter through” to the Scottish trade. 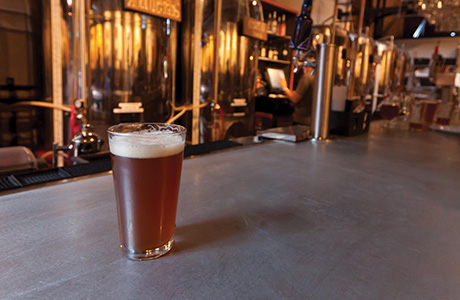 “What tends to happen now is you get more customers asking ‘what’s different?’ than before,” said Febers, adding that customers are now seeking out “specific types of beer”.

While more customers may be seeking out style over geography, Febers said there is still “national loyalty” among some customers when it comes to beer.

“I still have a lot of customers who drink German beers, who like the hoppiness and bitterness and tend to stick to that,” said Febers.

He acknowledged that customers visiting the on-trade have more beer knowledge than in the past, but said much of that has been picked up from bar staff.

But while staff have been helping consumers to know their Pilsners from their Saisons, they’ve also done their own beer homework beforehand.

“Most of your members of staff need to have knowledge, even if it’s just the basics, as customers are more knowledgeable,” said Febers.

“Gone are the days when you could just bluff it.”

Gareth Giles of The Moorings Bar in Aberdeen said he has also noticed an increase in customer knowledge, and said Aberdeen currently has a thriving beer scene.

“We were the first bar in Aberdeen to have a world beer selection of over a hundred beers but now there’s places like Brewdog, Six Degrees North and Casc,” he said.

There’s no shortage of world beer at The Moorings Bar which offers 36 beers at any one time over its 42 beer lines. And it’s the global beers that are proving popular – Giles said American craft lager Sam Adams “must be right up there” in terms of popularity, while Thai beer Singha has recently become the venue’s most popular lager.

Looking ahead, Giles predicted that “the darker side of things” will prove popular among world beer drinkers as consumers increasingly seek out the complex flavours offered by dark beer.

“Across our three Edinburgh outlets, American (US), English and Belgian beers are the biggest-selling beers,” he said.

“Customers enjoy trying something new and so if an outlet cannot afford to carry a large selection at one time, offering a different beer each week or month can prove very popular with the regulars.

“Age-wise, the range of consumers spread across the board, however the younger drinkers (18 to 30) are more likely to take a chance on unknown brands whereas the over 30 age group tends to focus on more well-known brands – those they are more familiar with.”