Ox and Finch in pole position with small plate concept.

THE small plate gourmet dining offered by Glasgow restaurant Ox and Finch has been proving popular with customers for almost a year now. 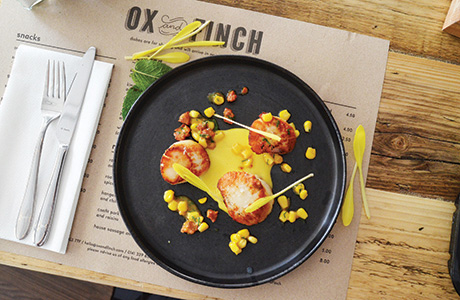 And the early success has earned the 70-cover venue recognition, with chef proprietor Jonathan MacDonald picking up the top food award at the 2014 Glenfiddich Spirit of Scotland Awards for the concept, where dishes such as confit duck with Thai yellow curry and crispy rice or braised ox cheek with celeriac purée each sit comfortably under £10.

It may be a relatively new business but the foundations of Ox and Finch were laid long before the keys to the Sauchiehall Street site were handed over, according to MacDonald.

“It took 18 months from the initial contact with the seller to the first customers coming through the door,” he said, adding that he and operations director Andy McSween sewed the seeds for the restaurant’s concept in 2012.

It was the result, said MacDonald, of the pair spotting an opportunity and acting on it.

“It sort of occurred to us that there [was] probably a gap for something quite foodie in the restaurant market but there [was] also a history of fine dining things being perceived as a bit dated and a bit stuffy and perhaps a bit over-priced,” said MacDonald.

With a concept in mind but no place to bring it to life, the pair instead launched catering firm Scoop Events while continuing to hunt for restaurant premises. 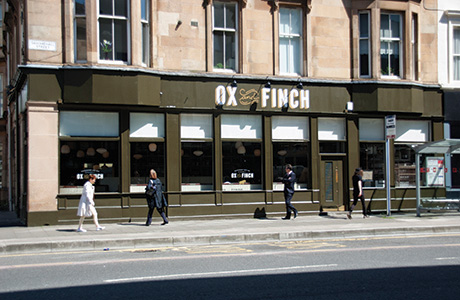 As a chef, MacDonald was no stranger to events catering, having previously worked with the McLaren Formula 1 team, where he catered for royalty, executives and the likes of Richard Branson, Puff Daddy and “whoever else felt like pitching up that day”.

Despite this A-lister experience, MacDonald said he intended to take a different approach to his own project.

Operating as a caterer before opening the doors at Ox and Finch was an experience which MacDonald said helped to “fine tune” the concept and build “a bit of a profile”.

“It meant we opened with a bit of a following and the key team already in place,” he said.

“Everything was as tried and tested as it can be for opening a new restaurant. That was really key to hitting the ground running.” 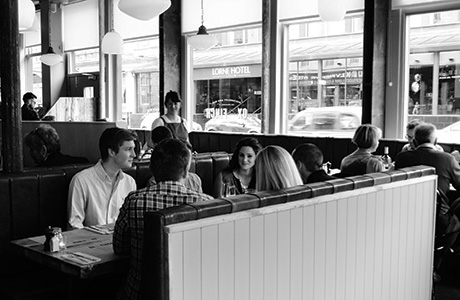 Ox and Finch employs 12 chefs in the kitchen, while the front of house team comprises four supervisors, a general manager and then a further 15 staff split between bar staff, floor staff and kitchen porters. Staff members work across both Ox and Finch and Scoop Events, although MacDonald admits the focus is firmly on the restaurant for now.

With its large team of chefs, it’s no surprise that the menu at Ox and Finch changes frequently, although MacDonald said he has opted for an ‘evolution not revolution’ approach to new dishes.

“We try never to change the whole menu in one go, we just change dishes as they come in and out of season,” he explained.

And, while sourcing produce might have presented logistical challenges for MacDonald in his globe-trotting F1 days, at Ox and Finch the chef has the benefit of quality suppliers on his doorstep.

“Pretty much all our suppliers are really close,” said MacDonald.

“We get cheese from George Mewes just up the road, bread from Kember & Jones, most of the meat comes from Rodgers Butchers – we didn’t actually just walk up a third of Byres Road to get our suppliers, it just turned out that way.”

The popularity of the restaurant, which trades seven days a week from 12 noon, continues to keep its owners busy.

However, that doesn’t mean there’s nothing new on the horizon.

Although it won’t be “Ox and Finch Two”, MacDonald said that he and McSween are actively looking for a second premises in either Glasgow or Edinburgh and have already made offers on some sites that “didn’t come together”.