ONE of the most historic hotels on the west coast of Scotland has come onto the market.
Located near Inveraray Castle, the Argyll Hotel occupies a Historic Scotland category A-listed building, which was designed by 18th century Scottish architect John Adam and constructed by the Duke of Argyll in the 1750s.
The 36-bedroom hotel, which was originally built as accommodation for visiting officials to Inveraray Castle, has two bars, a restaurant and two function rooms.
Staff accommodation is located in a wing to the rear of the hotel and comprises five double bedrooms, five single bedrooms, four bath/shower rooms and a sitting room.
Alistair Letham, a director with selling agent Colliers International described the hotel as “very well established” in a “great and popular west coast Scotland location”.
“The hotel itself, with its range of accommodation, attracts many tourists and other visitors and its imposing facade is a welcome beacon when entering the town of Inveraray,” said Letham.
“The business has been run entirely under management since it was purchased in 2006 and there is a great opportunity for new owners to further develop and direct the Argyll Hotel to new sectors of trade.”
Offers around £1.5 million plus VAT are being sought for the Argyll Hotel. 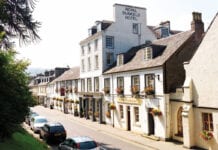 Market makes up for lost time