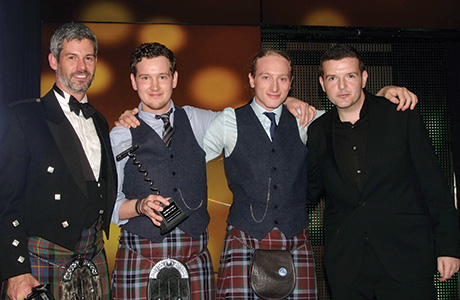 In their teenage years the pair worked part-time in the Dornoch Castle Hotel – bought in 2000 by parents Colin and Ros – but it wasn’t until returning from college and university that they began to channel their passion for Scotland’s native spirit into the hotel’s bar.

Keen to try as many whiskies from as many different periods as possible, the brothers soon developed a particular fondness for older bottlings from distilleries across Scotland. Reading about different production techniques online and in specialist whisky books, the Thompsons began buying bottles at auction.

Skip ahead to the present day and the ever-changing range at Dornoch Castle Hotel has between 200 and 300 whiskies, ranging from a contemporary bottle of Aberlour ten year old (£3.20 a dram) to a rare ten year old single cask Bowmore bottled in 1979 for the distillery’s bicentenary (£100 a dram).

It’s a diverse range which helped the bar clinch the SLTN Whisky Bar of the Year award for 2014, in association with Glenfiddich.

“We’ve always kept up on what’s happening in the whisky world, and followed whisky blogs,” Philip told SLTN. “We’ve always kept our ears to the ground. The real eye-opener is when you start to see these old bottles.

“I think they are under-appreciated over here. In Europe there’s a real market for these old-style bottles and people really appreciate the differences between them.”

While the collection contains its fair share of aged whisky – including a 40 year old Linkwood bottled by Gordon & MacPhail and a 40 year old Bunnahabhain bottled in 2003 – the bulk of the range focuses on bottles of malt aged for between ten and 20 years, but distilled and bottled in various different decades.

Philip said the collection allows the bar to offer customers – who include locals and tourists as well as whisky fans from across the world – “a snapshot of different distilleries from different decades”.

And Simon added that comparing historic bottlings with contemporary output allows customers to see “how production has changed over time”.

“At certain time periods in certain distilleries they’re producing whisky that’s some of the best ever made, then their production might go downhill for a few years, then it might come back on track,” said Simon.

“It’s interesting to chart that.”

The range of rare and unusual bottlings is part of the bar’s unique selling point, but what particularly impressed SLTN Awards judges was the pricing of these whiskies.

As well as the bar’s ‘direct pricing policy’ – which sees the price per dram highlighted on the bottle to make it easier for customers to see how much they’ll be paying – the brothers introduced a system of taking a lower margin on more expensive whiskies.

The emphasis, they say, is on providing great value. And it was influenced directly by their own experiences as whisky drinkers.

“Friends of ours will quite happily spend a lot of money on a dram, as long as they know they’re not getting ripped off and they recognise it as good value,” said Simon. “If the place is overpriced they’ll still have a whisky, but they might only have a £3 or £4 whisky.

The ambience in the bar has been another focus for the brothers, with display cases featuring some of the more interesting bottles, whisky books for customers to read and a museum-like hole in the wall containing historic memorabilia from various distilleries. 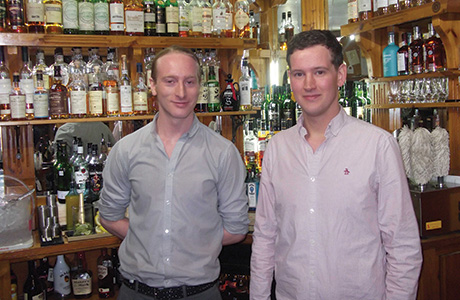 “The thing I always come back to in our bar – the way we present our whisky, the prices we have on our whisky, the ambience of our bar – is that we’ve just tried to create something that Simon and I, as complete and utter whisky geeks, would love to walk into as a whisky bar,” said Philip.

Si: “We’ve got our direct pricing policy. The price is on the bottle, to save you having to look at a list. It means people can order with confidence.

“Markups in bars can vary so much. You can order a Highland Park 12 year old for £3.20 in one pub and £8 in another place. We find it gives people confidence, and because they can see the prices, they’ll quite often treat themselves to a little upgrade. ‘I usually have this, which is £4, but look what I can have for £7’.”

Si: “Friends of ours will quite happily spend a lot of money on a dram, as long as they know they’re not getting ripped off and they recognise it as good value. If the place is overpriced they’ll still have a whisky, but they might only have a £3 or £4 whisky instead.

“If they see something they want that’s fairly priced they’ll quite happily push the button and pay £15, £20, £50, £100 a dram, if they see a fair value. So by overpricing a lot of places are losing out.”