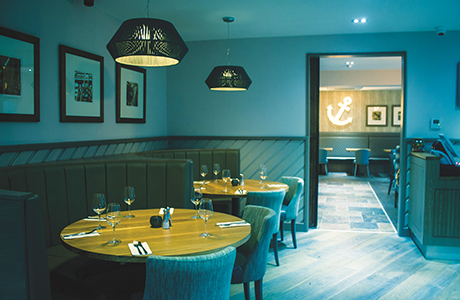 When Paul McGeough took over The Waterside Bar & Restaurant in Strathaven he expected the refurbishment of the premises to be a fairly quick process.

But planning restrictions on the building, which is in a conservation area in the South Lanarkshire town, meant he had to abandon an original August 2014 completion date.

The premises was purchased by Paul’s father Brian in January last year, but it was November before it opened to customers as new timber windows were required to comply with planning regulations.

Delays aside, Paul said the premises was completely gutted and rewired with the bulk of the work carried out by main contractor JSM Building.

“We got the keys last January and it took us until November before we reopened,” said Paul.

“We took it right back to a shell, but it took us longer because we had issues with planning. Eventually we came to an agreement with planners, but had to order new windows which cost us another five figures.”

It might not have been plain sailing all the way through the project, but the bar and restaurant now provides an oasis of calm.

Arranged in a U-shaped layout, the centrepiece of the premises is a black marble bar with a covered front of reclaimed wood tiles surrounded by a variety of different seating.

Olive-coloured ‘ostrich’ leather seating features around the periphery of the bar and in the semi-circle booths of the restaurant where teal fabric and tartan are also prominent.

The Waterside Bar & Restaurant’s nautical flavour is evident on a feature wall dominated by a large anchor lit by fairground lights and surrounded by sepia photographs.

A display wall of bottles showcases the bar’s wine range and signals the start of the round-tabled restaurant seating area. The bar and restaurant are divided by a large sliding wooden barn door which can be closed to separate the two areas.

A maitre’d station in the corner of the restaurant also provides a base where front-of-house staff can gather plates and food before and after service.

Customers can choose from an a la carte menu which includes confit of duck, seabass, roasted beetroot and butternut risotto or lamb shank puttanesca; there’s also a range of small plates, salads and side dishes on offer.

Paul, who runs the outlet with his wife Chantelle, said: “The menu has a good selection ranging from seafood, steaks and burgers.

“With the lunch and pre-theatre menu, we will change the menus every couple of days and the a la carte gets changed regularly too.”

On the wet side of the operation, the main suppliers are Belhaven, Inverarity Morton and Wallaces TCB.

A selection of cocktails is also available alongside smoothies, coffees and espressos from the bar’s Myrtle Espresso machine.

Timber flooring merges into slate floor tiles at the bar area and designers Thr3 Design have continued the maritime theme with thick ropes hanging from the roof trusses leading to overhead filament lights.

A line of tall teal bar seats provides another option for customers who want to be nearer the heart of the action.

Overhead, an industrial chrome pipe leads to air vents which stretch along the length of the bar providing a feature. This, in addition to the open roof trusses, emphasise the height of the main bar area.

The Powmillon Burn, a tributary of the River Avon, flows past the bar. Overlooking it is a large patio space where outside seating will be introduced in summer.

“Myself and Chantelle oversee everything,” he said.

“We have almost a hundred seats inside and with the outdoor area I expect the capacity to potentially almost double to nearer two hundred.”

Paul, who studied accountancy at Glasgow University before entering the trade, is also keen to hear from the venue’s customers and has employed feedback specialist Opinurate to manage online surveys with customers.

A card on each restaurant table urges visitors to leave feedback about their experience at tellwaterside.co.uk.

It also allows management to learn about the clientele in order to provide a more bespoke service.

“At the moment we are averaging couples in their 40s who are coming in for a meal,” said Paul.

“The insight has been phenomenal and getting feedback is great because you can improve customers’ experience.”

Despite the delay at the start of the project Paul said the team is pleased with the end result.

He added: “I’m delighted with the way it turned out, there’s always things that in hindsight you would do differently.

“But I’m very happy and think it definitely has the wow factor.”