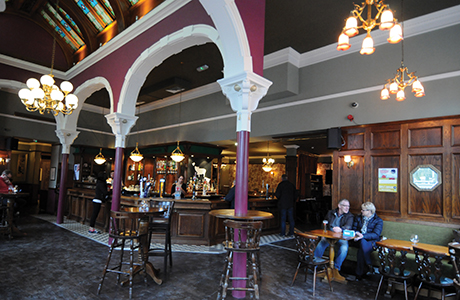 IT’S mid-afternoon on a freezing cold Wednesday in the first week of February and the bar is busy with customers; several tables in the dining area are occupied too. And the venue only opened five days ago.

It’s clear The Butterfly and The Pig has quickly made itself at home in Shawlands, on the south side of Glasgow.

But then owner Michele Pagliocca was in no doubt that his quirky bar and restaurant concept would fit right in.

Michele, who has run The Shed nightclub next door for the past 18 years, has had his eye on the prominent corner site (where Langside Avenue meets Pollokshaws Road) for some time.

The former Corona pub, however, was operated under tenancy and also as a managed house.

Michele considered other sites in Shawlands which might have been suitable to accommodate another The Butterfly and The Pig – a concept he first launched in August 2005 in a basement unit on Glasgow’s Bath Street (he also owns the adjacent Buff Club on Bath Lane) and added to seven years ago with The Tearooms on the ground floor.

But he was always drawn back to the Corona. So when landlord Spirit Pub Company approached him just before Christmas to say that the lease was available, Michele jumped at the chance.

“I had always wanted to do a bar in Shawlands and I had been after this place for a while but it was managed then a tenancy,” he told SLTN.

“I think I always thought ‘I’m going to get that pub one day’ so it was good to finally get it.”

It may have been a long time coming, but once the site was secured, Michele wasted no time in putting The Butterfly and The Pig’s stamp on the place. He picked up the keys on January 6 and work to strip out the existing interior began immediately.

With the Scottish League Cup semi-finals due to take place at nearby Hampden on Saturday January 31 and Sunday February 1, Michele was adamant the pub would open in time to capitalise on the increased footfall in the area that weekend.

It meant turning around the revamp in just three weeks.

But Michele was confident of meeting the deadline, and assembled a team that has worked on some of his previous refurbishments, which included Bridgewater Building Solutions, Compass Decorating Services and HF Electrical, to help him recreate the quirky ’shabby chic’ interior The Butterfly and The Pig is known for. 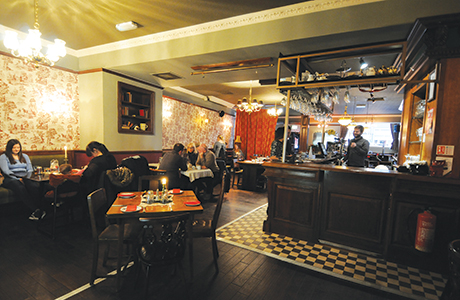 A key objective of the £220,000 self-funded revamp was to ‘split’ the 450-capacity outlet into different zones around the large central bar.

In the main bar area, new dark wood flooring and monochrome floor tiles have been paired with the original wooden bar, wood panelling and open fire. The space is furnished with a mix of loose furniture, including poseur tables, high chairs and bench seating upholstered in green fabric; and there’s a bold purple and khaki green colour scheme, with the cornicing picked out in white and gold and a large stained glass feature in the ceiling.

Large windows along both sides of the bar area feature The Butterfly and The Pig logo (it also appears on the door mat and a back-bar mirror) and there’s a stage at one side for live bands – also a feature of its city centre sister outlet. 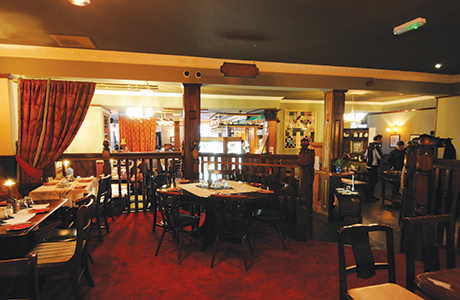 Further similarities between the two are evident in the dining area, from the mis-matched tables and chairs and embroidered tablecloths to the pianos, grandfather clock and quirky ornaments and objects; a raised carpeted area at the rear of the premises houses the ‘tearooms’; and there are a couple of snugs, again featuring quirky armchairs, tables and standard lamps.

Elsewhere, the toilets were completely overhauled; there were changes made to the kitchen, including the installation of some equipment brought over from The Butterfly and The Pig on Partick Bridge Street in Glasgow’s west end, which Michele opened in September 2013 and closed recently when Belhaven sold the site to Colin Beattie; and the outside of the building was painted and fitted with new external lights and signage.

True to his word, Michele opened the bar on the Friday (January 30) before the football.

“We did it all in 23 days – I think it’s the quickest refurbishment I’ve done,” he said.

“The goal was to get it open for the football; it’s not a football pub but we knew the area would be busy. And we did it.

“Bridgewater was the main contractor; I use them all the time and I knew I could rely on them to get the job done in time.

“The initial feedback has been great.

“We’ve zoned it so we have a pub area, a stage, a dining room and a tearoom area at the back.

“It’s family-friendly; we cater for everyone. The whole principle of The Butterfly and The Pig is to be homely and make people feel comfortable.

“We highlighted all the best bits of the Corona. We opened up the fireplaces and put mirrors and plates on the walls, like we have in town.

“This is almost a carbon copy [of Bath Street].”

It’s not just the interior of the Shawlands outlet that bears more than a passing resemblance to its sister outlet. 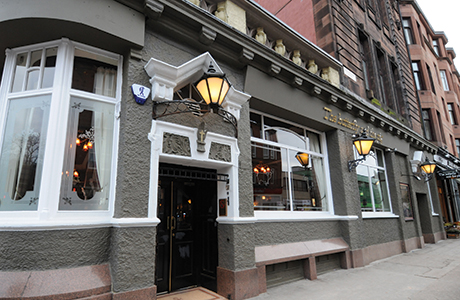 Food majors in quirky takes on traditional dishes, all made using fresh ingredients sourced from suppliers, including butcher McLays Ltd, fish merchant MacCallums of Troon, Braehead Foods and Dunns Food & Drinks. The Tearooms menu features a range of snacks, sandwiches and afternoon tea, including The Butterfly and The Pig’s homemade bread and cakes; while dishes on the main menu include Cilla Black – black pudding with salad, bacon and a quail egg –
as well as a choice of burgers, fish and chips, and a Sunday roast.

Drinks-wise there’s a broad range of draught beers and
ales (the pub is tied to Spirit for beer), including Tennent’s (complete with ‘retro’ font), Belhaven Best, Guinness Extra Cold, Amstel, Samuel Adams, West 4 and Charles Wells Dogfish Head DNA, as well as spirits from Matthew Clark and wines from
Zonin.

There’s also common ground between The Butterfly and The Pig in Shawlands and its Bath Street sister when it comes to entertainment, with live bands a key feature alongside open mic nights and quizzes.

It’s an offer that seems to be going down well with customers.

And Michele reckons it could prove popular in other areas too.

“The formula works,” he said.

“We’ve been in Bath Street for ten years now; we’ve tweaked it, stabilised the menus, added the tearooms, but the concept is the same.

“I think we could have another two in Scotland – maybe one in Aberdeen and one in Edinburgh; and it could travel further.

“Some people were surprised at me doing a Butterfly and Pig in Shawlands and didn’t know if it was ready for it. But, touch wood, so far I’m proving them wrong.