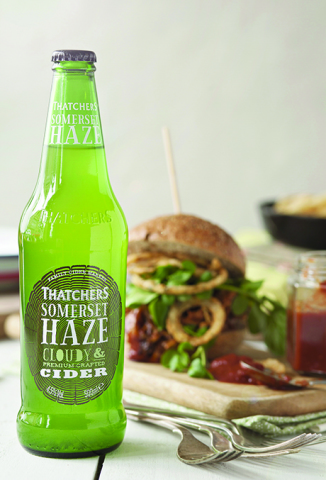 Aimed at young adults who have been introduced to the category through sweeter fruit-flavoured drinks, Thatchers Red and Thatchers Somerset Haze are currently being rolled out to the on and off-trades.

Thatchers Red is a 4% ABV red apple cider with a sweet flavour targeted at 18 to 24 year old consumers.

The cider is available in 500ml and 330ml glass bottles as well as in keg format.

Thatchers Somerset Haze, meanwhile, is a cloudy cider made from four different types of apples. The flavour has been designed to appeal to 18 to 34 year olds.

Both new variants will be supported through branded POS, merchandising, sampling and events.

Martin Thatcher, fourth generation cider maker at Thatchers Cider, said Thatchers Red “will appeal to those consumers who favour fruit and flavoured ciders, and who now want to begin their exploration of apple cider”.

He added that Somerset Haze, “gives those drinkers who are looking for an easy-drinking, cloudy cider the opportunity to experience the premium taste of Thatchers”.

“Haze has the heritage of four generations of cider making behind it and we believe it will fill the gap in the market for an authentic, sweeter, lower ABV premium cloudy cider,” said Thatcher.