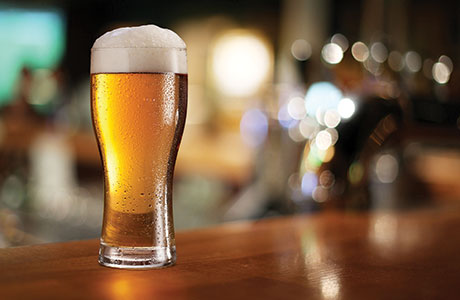 BEER sales have rebounded after five years of decline, a new report by Mintel has claimed.
Analysis shows sales increased by 1.3% to an estimated 4.24 billion litres in 2014.
And the report says lager continues to drive the market, with sales rising by an estimated 1.7% to 3.17 billion litres by the end of 2014.
While ale sales have also been rising, the research predicted stout sales will have fallen to 183 million litres last year.
Chris Wisson, senior drinks analyst at Mintel, said much of the sales increase was down to good weather and sporting events such as the World Cup.
He said: “Pressures on household finances, health concerns and competition from other markets have led to significant volume sales decline over the past five years for the beer market.
“However, 2014 has seen volume sales finally bounce back into growth, buoyed by a warm summer and the football World Cup.
“Whilst much of the market’s recent value growth has been driven by inflation and the now-defunct beer tax escalator, successive 1p cuts on the tax on pints and the slowdown in the cider market bode well for beer’s improving fortunes.”
The majority of UK drinkers chose lager, but other categories also increased in popularity.
The report claims more than half of UK consumers (54%) drank lager in the six months to September 2014, with a quarter (26%) opting for ale and (21%) drinking bitter.
The craft beer category, the report showed, was also having a significant impact on beer sales.
Researchers suggested it was increasing in popularity.
A fifth of people questioned in the survey (20%) said they had consumed craft beer in the past six months, rising to almost 31% of 25 to 34 year olds and 24% of 18 to 24 year olds.
Analysts said the craft category was “still driving premiumisation”.
This was illustrated by 34% of beer drinkers who admitted they would pay more for craft beers, rising to 43% among 25 to 34 year olds.
The research, however, also found that over a third of those questioned (36%) were unsure what ‘craft beer’ actually means.
And 31% said they would like to understand more about the category and the ingredients used.
Beer sales may have seen a resurgence, but Mintel claimed the cider category compared less favourably.
Volume sales of cider were estimated to have fallen by 0.8% to 949 million litres in 2014, down from 957 million litres in 2013.
Wisson cited the rise of craft beer as a contributing factor.
“Despite the significant recent growth of the cider category, volume sales are surprisingly estimated to dip slightly in 2014,” he said.
“Some of cider’s momentum appears to have been lost to a rejuvenated beer category, which is seeing strong growth from various segments such as craft and world/global beers.”