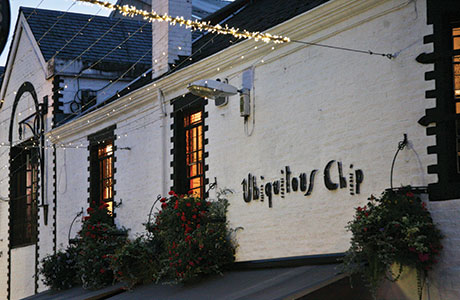 THE sommeliers at Glasgow bar and restaurant Ubiquitous Chip have added a new page to their wine list since winning the coveted SLTN Wine Award, in association with Inverarity Morton, last November.
It demonstrates how seriously the eatery takes its wine offer when a full page is dedicated
to cutting-edge wine technology.
Speaking to SLTN, Marshall Bass, head sommelier at the Ashton Lane venue, said there is something for everyone’s palate and budget on the wine list.
The Chip’s vast array of wines ranges from a £17 ‘wine of the month’ to a £2200 bottle of 1985 Chateau Petrus.

The average spend, said Bass, is closer to £30 a bottle, but the introduction of eight wines by the glass using the Coravin wine preservation system (see below) hopes to change this.
Founded in 1971 by Ronnie Clydesdale, Ubiquitous Chip was already well known for its wine when Bass joined the team three years ago.
“Ronnie was a big wine guy and the restaurant had quite a lot of space for wine; even the toilets used to be cellars here before I arrived,” said Bass.
“He used to go away on holiday and come back with these obscure wines.”
Ronnie died in April 2010, but the family restaurant business has continued its pursuit of excellence in global wines under the leadership of his son Colin.
The team includes five sommeliers who each have Level 3 qualifications from the Wine Spirit and Education Trust (WSET).
And Bass said the firm is now looking at becoming an education provider in order to bring wine training in-house.
Ubiquitous Chip’s 50-page wine menu offers 35 wines by the glass, which can appear daunting.
But Bass insisted the process is also about educating the customer and expanding their wine knowledge.
“It’s a massive list, but that doesn’t mean it has to be a scary list,” said Bass. “The first nine pages are for your average customer, the second half of the list is for geeks like me.
“We try to educate people, not intimidate people.”
A sommelier is, he said, “a sales position” where the end result is to sell a bottle of wine to the customer.
“You have to strike a deal, you have to make them happy and you happy,” said Bass. “It’s about striking the right balance. You can find something for everybody within our range.”
The Chip also hosts a regular wine club and sells wine flights to encourage customers to expand their knowledge about regions and countries of origin.
Craig McLeod, wine buyer, has been with the Chip for 27 years and meets other members of the team every week to decide which wines to stock.
In addition to classic French, Italian and Spanish wines, producers from unusual territories such as Washington State, Croatia, Armenia, Mexico and Bulgaria also feature.
“We have 60 different suppliers, some we order from twice a week and others we order from once a year,” said McLeod.
“The ultimate aim is to have a unique wine list, something you can’t get anywhere else.
“It means nothing if your wine list has the same wines which you can buy in Sainsbury’s.
“It doesn’t matter where in the world it’s from, if the wine is good enough and we think we can sell it we will. Price is not a big issue.”