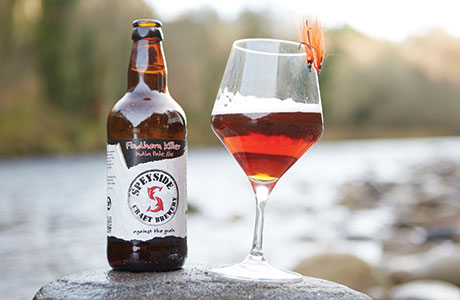 A SPEYSIDE brewery has named its latest beer after a famous salmon fishing fly.
Findhorn Killer – a red India Pale Ale from Speyside Craft Brewery in Forres – takes its name from the brightly-coloured Findhorn Killer fly, which was created by fly fisherman George Lilley to stand out in the peaty-coloured waters.
Seb Jones, managing director of the Speyside Craft Brewery, said: “We like to name all our beers after local icons and our sales manager Dan – himself a keen angler and regular user of the Findhorn Killer fly – came up with the name because the colours of it reflected our new red India Pale Ale.
“We then discovered that a local angler had created the fly many years ago.
“We invited him to the brewery to sample the beer and take in a tour. It was a great moment for all the team.”
George Lilley said: “It’s very unusual for a beer to be connected with angling in this way, but if it’s as successful as the fly has been
all these years I’m sure it’ll do well.”