MARTIN Wishart’s track record and reputation are undeniable. From a humble Youth Training Scheme background, he progressed to La Gavroche in London with mentors Albert and Michel Roux Jr before securing a Michelin star at two of his eponymous Scottish restaurants.
Now he has brought his talents to Scotland’s largest city and opened a new brasserie, The Honours Glasgow.
The restaurant, at the boutique Malmaison hotel in West George Street, hopes to build on the success of his Edinburgh brasserie of the same name.
Speaking to SLTN last week he said he is delighted with the new £1.3 million restaurant, which includes a new custom-built kitchen.
Prior to the partnership with Malmaison, he had been looking for a stand alone eatery in the city to complement his existing restaurants and provide a high-quality food offer to cater for fine diners.
He said: “I did look in Glasgow for a couple of years and pinpointed three properties in the city centre.
“But the one we looked at initially there was too much work to be done.”
The first offer of a partnership came from Hotel Du Vin, who offered him Gordon Ramsay’s former Amaryllis premises at One Devonshire Gardens, but he declined.
It was only then that an agreement was struck to open at Malmaison with the hotel group picking up the tab.
“One Devonshire Gardens is a great building, but I just didn’t get the right feeling about it,” said Wishart.
“With Malmaison, there was no capital involved, only training and staffing costs for the kitchen and restaurant, so it made sense.”
The Honours Glasgow will be similar to his New Town brasserie in Edinburgh.
But he claims there are no ambitions to emulate his Michelin-starred restaurants at The Shore, Leith, or Cameron House Hotel at Loch Lomond.
“Any big city needs that style of restaurant, but there are no ambitions to look for things like stars,” said Wishart.
“The ambition is to be successful and look after the customers who come in.”
Glasgow catering suppliers RH Morton helped design the new kitchen, where 14 staff work over a seven-day operation.
The chef has also agreed to provide a breakfast service for Malmaison as part of the deal.
But the main part of the business, which opened its doors on November 14, serves Scottish/French-influenced seasonal cooking such as seafood, game and grill dishes, which have been popular at The Honours in Edinburgh.
“We’ve slightly reduced the menu in Glasgow by 15%, but we have kept all the favourites,” said Wishart. “We have a big emphasis on the grill.
“It’s a new market for me and we are not as familiar with it as Edinburgh. But our priority will always be the provision of quality food and service.”
The brasserie will also offer set price lunches and pre-theatre menus plus a special menu targeting weekend diners. 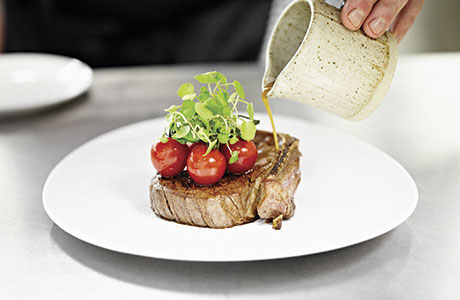 It is the award-winning chef’s first venture in Glasgow and he recognises it may attract a different clientele from his New Town restaurant.
He said he wants to attract a wide range of customers including couples, large groups and families with young children.
Wishart has employed many of the suppliers he used in his other restaurants, including Aberdeenshire steak supplier Donald Russell, Campbells Prime Meats, Braehead Foods in Ayrshire and Borders game supplier Burnside Farm Foods.
“When we opened at Cameron House Hotel we wanted to use some local suppliers,” he said.
“We are only bothered about the quality of the product and the consistency.
“We will worry about the cost of it after that.
“The produce we have here I’ve taken it to New York and discussed the quality of the grouse, fish and scallops. It’s the best in the world.”
Since opening his eponymous restaurant in Leith in 1999 and securing Michelin accolades, Wishart has also won four AA rosettes and the AA Chefs’ Chef of the Year 2010-2011.
The profile of catering and high-end cookery may have changed since he started out in the industry. But he insisted his achievements have all been down to hard work and believes it is important to invest in the training of young chefs.
He added: “The work is exactly as it used to be, but at this level chefs need to work cleanly, quickly and professionally.
“For me personally, it gave me something I wasn’t getting at school.
“If you find yourself saying, I’m not enjoying this, that’s when you need to leave.
“You’ve got to love what you’re doing.”