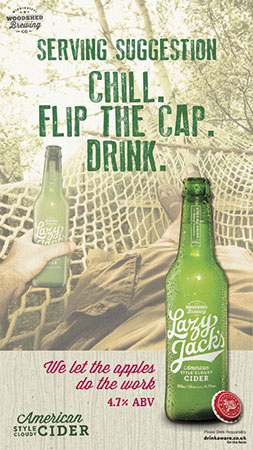 Lazy Jack’sUS cider brand Lazy Jack’s is the subject of an ongoing marketing campaign from Halewood International, the firm behind the brand in the UK.
The campaign, which saw the brand advertised through outdoor digital sites across the UK last month, sees Halewood hosting sampling events for the brand throughout December.
Halewood has also taken the brand “on the road” using a Lazy Jack’s branded Chevrolet, in reference to the brand’s American heritage, to tour the country.
The campaign is being supported through the brand’s social media channels and website.
Alex Kennedy, brand manager at Halewood International, said there has been “significant interest” from both the trade and consumers in Lazy Jack’s since its launch earlier this year.
“Following a number of major listings, we believe it is the right time to launch an above-the-line campaign in order to broaden the exposure of the brand with consumers in the lead-up to Christmas,” said Kennedy.