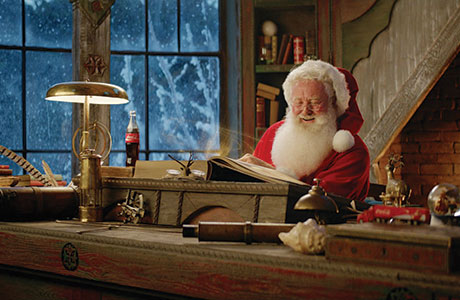 COCA-Cola Enterprises has launched a festive TV campaign as its Christmas trucks hit the streets of Scotland.
The Holidays are Coming advertisement, the firm claims, marks “the official countdown to Christmas”.
It includes a new ‘give a little happiness’ segment which features the Coca-Cola Father Christmas backed by the Make Someone Happy track by American singer and musician Jimmy Durante.
The company also released details of this year’s Coca-Cola Christmas Truck Tour, which will visit more than 40 cities supported by ‘a sampling, choir and photo experience’.
The tour will make stops in high footfall locations where consumers will be given the chance to buy Christmas-themed 500ml packs of Coca-Cola, Diet Coke and Coca-Cola Zero.
The set of nine special edition packs, the company says, are “designed to drive sales over the festive period”.
They will encourage shoppers to ‘Share a Coke’ with reindeers named Rudolph, Blitzen, Comet, Cupid, Dancer, Dasher, Donner, Prancer or Vixen.
To extend and personalise the theme, the soft drinks giant has introduced personalised digital greetings cards to further engage consumers online.
The digital cards will allow people to send a personalised video message to family and friends.
Consumers can also create a personalised Christmas card and have their drinks wrapped in new festive ribbon packaging using the brand’s website.
Nick Canney, vice president of sales and marketing at CCE, said: “More shoppers buy from the Coca-Cola range than other soft drinks brands at Christmas and spend more on it, leading to a higher basket spend.
“Our multimedia marketing campaign this year includes TV, digital, out of home, the Christmas truck tour, in-store and PR so visibility will be high.
“We recommend retailers stay stocked up on seasonal packs of the Coca-Cola range in the lead up to and over Christmas and New Year.”