Event hears viable long-term sources are essential to the industry

SUSTAINABILITY should be at the heart of Scotland’s food and drink industry as it looks to raise standards and compete with other countries around the world. 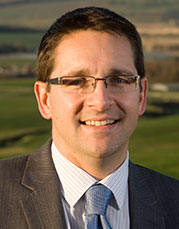 That was the message at a recent Edinburgh event hosted by the Sustainable Restaurant Association.
Speaking at the Ingredients for Success event at the Scottish Cafe & Restaurant, Richard Lochhead, cabinet secretary for environment, food and rural affairs, said the industry has a responsibility to protect the country’s resources.
“Resources are under threat and we must be aware of that when producing our fantastic food,” said Lochhead.
“Demand for local food has increased dramatically and it is so important to look at the whole story from farmers and fishermen to the table,”
Scotland Food and Drink chief executive, James Withers, argued that Scotland’s unique scenery and environment has become linked to the country’s produce in the eyes of visitors from overseas.
“It might be lochs, pristine waters, fertile lands, but it’s that landscape from which our larder comes, and it’s become our selling point,” he said.
He argued that protecting the supply chain is key to maintaining the high standard of Scotland’s produce.
“You hear many industry organisations talking about level playing fields,” said Withers.
“But actually we don’t want a level playing field. We want to embrace higher standards and higher regulations, because then we can go to Japan and talk about higher animal welfare standards, higher environmental standards.
“If we can’t talk about standards then we’re talking about price, which is a race to the bottom and we’ll lose that. It’s not a race we want to run.
“So if we embrace higher standards then we embrace the principle of sustainability.”
He stressed that sustainability is not only an environmental issue.
“Whether you believe climate change is man-made or not, and there are still dinosaurs out there that don’t – some of them even get secretary of state jobs – it doesn’t matter any more, because it’s just common sense,” he said.
“It’s just sound business sense.”
Guests at the event were served food and drink from a range of suppliers that included Innis & Gunn, Liberty Wines and Cuddybridge Apple Juice.
Carina Contini, who launched Scottish Cafe & Restaurant with husband Victor in 2009, said there is a “treasure trove of suppliers in Scotland”.
She added that becoming a member of the Sustainable Restaurant Association provided the husband and wife team the opportunity to “be reviewed, awarded and assessed on core values aligned with sourcing and environmental issues and by an organisation that also supports Scotland’s number one Michelin-starred restaurant and the UK’s number one fish and chip shop”.