EVEN on a dreich autumn afternoon, the view of Glasgow’s Queen’s Park through the large picture windows of The McMillan Bar & Chop House is stunning.
It’s what sold the site to Scott McMillan when he first clapped eyes on it – that and the ‘unusual’ shape of the building, which sits on the corner where Titwood Road meets Pollokshaws Road.
It also helped him see beyond the interior of the then empty premises, which was at one time a garage and, laterally, a carpet shop.
Scott, who has operated the 60-cover McMillan at Broomhill in Glasgow’s west end for the past 12 years, said he spotted the potential for his second venue – a bar and chop house – immediately.
“When I came to see it, it had been empty for years, apart from a few short-term leases for shops and things,” Scott told SLTN.
“It was basically an empty shell but I saw the potential. Despite the enormity of it, I knew I had to do it; I tend to go with my gut on these things.
“I loved the windows, the location and the fantastic view overlooking the park. I couldn’t believe someone hadn’t done it before.”
Despite his confidence in the site and its location, the road to opening the bar and restaurant was far from easy.

In fact, it took more than three years from when he first viewed the premises until he opened the doors in September of this year.
Scott said obtaining a licence for the premises – the first new licence in Shawlands for a number of years – was one of the biggest challenges.
With the venue’s very existence hinging on the licence, it meant the extensive refurbishment project was put on ice until the licence for the leasehold property was granted.
“The whole process took 14 months and we got the licence in March,” said Scott.
“The day after it was granted, I picked up the keys and we got started straight away.”
The refurbishment was very much a family affair.
Scott’s brother Derek, who owns Derek McMillan Joiners, was drafted in to work on the five-month project and help bring Scott and wife Evelyn’s bar restaurant concept to life. He also called upon various friends in the trade for help and advice along the way.
He admits he had a clear vision of how he wanted The McMillan to look from the outset.
And the vast 5000 square foot floor space had a major influence on the layout and design, on which the McMillans worked with ZM Architecture.
“It’s a big unit so I knew we had to break up the space,” said Scott.
“I had a vision of how I wanted it to look. I take inspiration from places I’ve travelled to over the years and I knew exactly what I wanted to do.
“Usually the problem is trying to find more floor space but we had plenty, it was just a case of splitting it up into different areas.”

To achieve this and give The McMillan its cosy and intimate atmosphere, large pieces of furniture – both custom-made and sourced from Thusa in Falkirk – have been used throughout.
The centre of the 180-capacity venue is dominated by the U-shaped bar, which has a down-lit dark wood frontage, stainless steel top and a central stepped back-bar with fibre optics which illuminate the spirits bottles.
Custom-built dark wood booths with red leather upholstery run along an exposed brick wall, which features the large windows overlooking Queen’s Park; there are also a couple of dark wood poseur tables and stools upholstered in red leather.
A ‘snug’ area, furnished with a large dark wood table and red leather banquette seating and chairs, has been created in a recess opposite the bar and, next to that, a private dining room, which can accommodate 24 people.
The space at the rear of the venue is carpeted and features booths along both sides; there are also a number of loose tables and chairs opposite the bar.
It wasn’t just furniture that was used to ‘break up’ the space.
Suspended ceiling panels feature around the perimeter of the venue, with the central space left open exposing pipework and ducts. 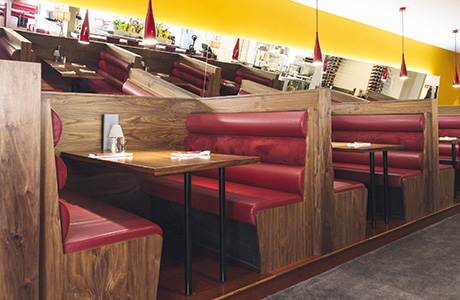 Lighting, which was sourced from Spain, also plays an important role in creating the intimate ambiance; large black dome light fittings, with a pleated gold interior, feature in the central ‘open’ section, elegant pendant lights have been used above the booths and there are lamps on the tables.
The refurb, which totalled £350,000 and was funded by the McMillans along with a loan from their draught supplier Tennent’s, also involved the installation of a new kitchen, which has an open pass and chargrill.
Scott said the revamp took in every part of the building.
“Absolutely everything was done – it was rewired, replumbed, we built a new kitchen from scratch,” he said.
“We did spend a bit more but once we started we thought there’s no point not doing it properly.
“We’ve used quality materials; I think if you invest in the right materials it will last.
“We’re really pleased with it.”
The McMillans are equally pleased with how the venue has been trading since its September launch.
Apart from some locally-distributed fliers, the family hasn’t advertised the venue. Instead Scott’s son Miles, who is studying accountancy and works part-time in The McMillan, has focused on social media activity.
It’s an approach that seems to be paying dividends, with the venue said to be averaging around 300 covers on a Saturday.
In fact, Scott is already on the look-out for another site.
“This is the first place we’ve done since the west end and it’s the first new premises licence in Shawlands for years so it’s an exercise we’ve learned a lot from,” he said.
“I have a lot of friends in the trade who have helped; Lindsays [solicitors] were great and Tennent’s have been very supportive.
“This has been a big change for us, especially the scale of the place, but we’re getting there. It’s going great.
“We’ve learned from this and we’ll take that forward to the next one. Hopefully the next one will be easier.
“I’ve got another bar/restaurant in a similar vein to this in the pipeline so watch this space.”