Siblings aim to balance business with return to the ring, as Graeme Murray reports

SIBLINGS Danny and Ronnie Singh don’t shy away from a challenge.

The pair, who run the Gulab Tandoori at Stanecastle in Irvine, have a passion for boxing which they inherited from their father Gugy.
But the brothers put their amateur fighting careers on hold after taking on the restaurant two years ago.
With no background in the trade, cynics might have expected them to hit the ropes or even the canvas in their first venture.
But the restaurant was so popular the entrepreneurs opened a second unit, called The Original Gulab, around a mile away in Irvine town centre earlier this year.

We didn’t know anything about curries and had to be here every night to learn about the business.

Speaking to SLTN at the Gulab Tandoori, Danny said: “We didn’t have any restaurant experience when we took over this place, so we had to take time out and have spent the last two years learning about the business.
“The menu is based on traditional Indian food and most of them are Punjab dishes.
“We have one chef who is from Nepal and his dishes are very colourful.
“Our Punjab chef makes more traditional Indian dishes, which are spicier.”
The brothers spent more than £100,000 on the self-funded refurbishment of the restaurant before doing stints in the kitchen to learn more about hygiene and food preparation in addition to bar and restaurant management.
They then recruited a team of a dozen staff, which is divided between kitchen and front-of-house.
Their training and hard work paid off after the Gulab Tandoori clinched the Team of the Year title at the Scottish Curry Awards in April.
Ronnie, who along with his brother studied sport and exercise science at University of the West of Scotland, admitted learning the trade has been a challenge.
He said: “We came in a month before we took over the restaurant and it took us at least three months to get used to it.
“We didn’t know anything about curries and had to be here every single night to learn the restaurant business.
“We both studied the same subject at university, so we are interested in health and fitness and are always trying to make the food healthier.”
In January, the pair took over premises in Irvine town centre and invested £60,000 refurbishing the eatery and installing a new kitchen before launching The Original Gulab. 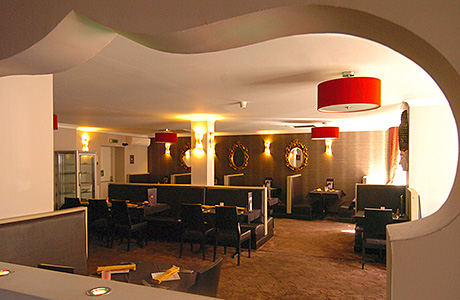 The restaurant’s focus is on lunchtime trade, but they say it is also popular at weekends with diners.
The business, which previously traded as Le Raj before the Singhs revamped and relaunched it, is, they claim, “still growing”.
Meanwhile, the Gulab Tandoori, which also offers set meals and takeaways, has an adjoining bar, which is said to be an important part of the business.
Danny believes good service is vital in gaining and retaining customers at both restaurants.
He said: “We have two types of customers who come in: those who like mild dishes and those who like spicy ones.
“The most popular dishes we have are chicken korma and south Indian garlic chili chicken, which are the biggest sellers.

Service is very important, if you’ve not got the right service people won’t come back.

“In the restaurant trade service is very important, if you’ve not got the right service people don’t come back.”
At the Stanecastle restaurant, the brothers’ love of boxing is very evident.
Behind the eatery’s bar, a signed pair of boxing gloves from Amir Khan sit next to Scottish amateur boxing medals and vests which have been worn in a string of Scottish competitions.
There are also photographs of the duo with boxing heroes such as Mike Tyson.
The pair still have hopes of turning professional, but they recognise how much dedication is required to achieve that goal.
Danny added: “Boxing is strenuous, but trying to find the right staff in this business can also be stressful and requires dedication.”
And the sparring partners still maintain a strict training regime before arriving at the restaurant.
“My dad built a boxing gym at the back of the house and we still train for two hours before coming into work,” added Ronnie.
“If we turned professional, we would need to employ some extra staff because so much work is involved.”