Why should wine have all the fun? Whisky is just as good a match for quality cuisine 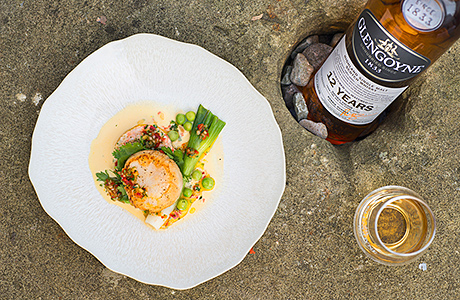 IT’S been the province of wine producers for years, but there are other drinks just as well suited to matching with food.

And when it comes to choosing a product with a range of subtle flavours, Scottish licensees needn’t look far for a worthy alternative to wine.
Ian Macleod Distillers, the firm behind the Glengoyne and Tamdhu single malts, is encouraging bar and restaurant operators to experiment with pairing whisky and food in order to give their outlets a point of difference.
The new direction was inspired by the company’s existing focus on the flavour profiles of its various whisky expressions, as well as a recent exercise with Trossachs hotel and restaurant Monachyle Mhor.
Headed by chef and whisky fan Tom Lewis, Monachyle Mhor recently hosted a dedicated whisky and food matching dinner for Ian Macleod that paired dishes with different expressions in the Glengoyne range.
“In the past couple of years we’ve had a number of requests to do whisky dinners, which is obviously quite new because traditionally people would associate wine with meals,” said Ian Macleod UK sales and marketing co-ordinator Katy Macanna.

“We’ve always thought Glengoyne matched well with food because of its versatility, the fact it’s un-peated, it’s relatively easy drinking, and also because we’ve got seven expressions in the core range, each with different flavour characteristics.
“All these things led us to thinking about how you express the flavours more – and you can express them through food.”
Opening peoples’ minds to different ways of drinking whisky is important for the future of the industry, said Katy, highlighting markets such as Asia, Scandinavia and Germany, where whisky is popular with younger consumers than is generally the case in the UK.
“Whisky, traditionally, has been thought of as the ‘old man in the armchair in front of the fire’ kind of drink,” she said.
“We’ve done whisky and chocolate pairing events before.
“So it is just opening peoples’ minds to thinking about it in different situations – not just as a digestif after a meal, but even before a meal, with a meal and any other kind of time.
“At Glengoyne we’ve always had that mindset.”

The breadth of flavours present in Scotch whisky actually encourages experimentation, said Tom Lewis.
And chefs shouldn’t be afraid to have a go at finding their own matches.
“When we go out now we’re looking for something different and whisky is, for me, just a really easy thing for someone to do in their restaurant or bar and just have a bit of fun with,” said Tom.
He added that experimenting with pairing even one or two whiskies with different dishes can help boost a chef’s confidence.
“Start with the whisky first,” advised Tom.
“Take your time. Smell it three times, take a little sip, add a little bit of water, take time to find the little things. Because you know what you’re cooking – you know what’s in season, you know what’s fresh, you know what the weather is.
“So you’ve just got to find the little triggers in the dish that can just complement the whisky.”
It’s not an exercise limited to gourmet chefs or whisky aficionados, either.
By taking a little time and paying attention to the flavours in the spirit and even talking it over with others in the kitchen, even someone who isn’t overly familiar with whisky should be able to pick out some of the defining characteristics.

You’ve got to find the triggers in the food that complement the whisky.

“Often those triggers are acidity, earthiness, freshness, lemon, lime zest, caramel,” said Tom.
“Often people tend to work on the sweetness of whisky, but I think there are a lot of other elements to it.”
And flavour isn’t the only consideration.
In a climate such as Scotland’s, even the weather can have an impact on what whiskies and ingredients to use.
“Whisky is such a great drink and there’s so many variants – there’s a glass of wine for every mood you’re in and there’s a whisky for every mood you’re in,” said Tom.
“Weather, too, has a huge influence on what you want to drink and what you want to eat and the whisky industry allows us to have a different whisky for every time of day and every type of weather.”
The chef put his money where his mouth is when he created his recent whisky and food matching menu (see right).
It started with a course of Cumbrae oysters with a shallot dressing that was accompanied by Glengoyne 10 year old.
Tom said the whisky was a perfect match for the mineral flavour of the oysters.
“Oyster is one of the purest things you can eat, especially the minerally oysters we get in Scotland, and for me it just balances off the ten year old so well,” he said.
The oysters were followed by Carse of Stirling wood pigeon with black pudding and pearl barley, accompanied by Glengoyne 15 year old.

Whisky is an easy thing for someone to do in their restaurant or bar.

In this case, Tom said the “earthy notes” of the 15 year old whisky worked well with the spice of the black pudding.
Other courses included scallop and Mull crab with Glengoyne 12 year old and Monachyle venison with Balquhidder chanterelles, accompanied by Glengoyne 18 year old.
“The 18 pretty much goes with most things,” said Tom.
“It’s a wonderful whisky.
“It’s such a great whisky that you want to celebrate that.
“You’re getting a little bit of spice coming through, but it’s much more rounded.
“Venison has a real sweetness, and I think that marries up so well to the 18 year old.”
The Monachyle Mhor event, said Katy, was the firm’s “first step” in exploring whisky and food matching.
And she encouraged Scottish chefs to experiment with whisky and find their own matches.
“We don’t want to be prescriptive about it,” she said. “We want people to realise the versatility and what you can do with whisky.”